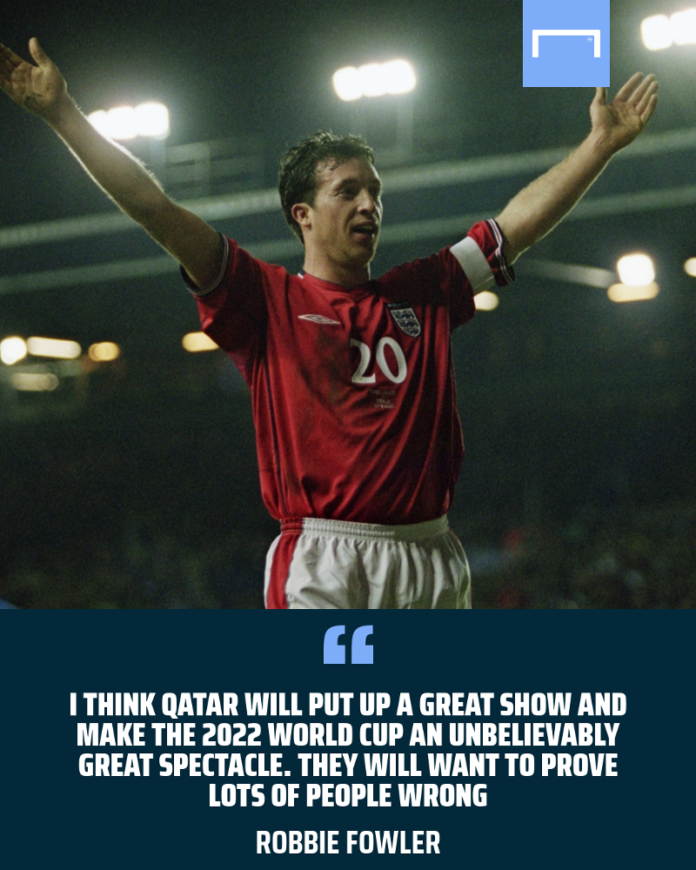 With stunning stadiums that feature cutting-edge technology and world-class infrastructure, Qatar have promised a wonderful experience for fans…Former Liverpool

striker Robbie Fowler is one of many stars of the game who are looking forward to the 2022 World Cup which will be held in  Qatar.

With stunning stadiums that feature cutting-edge technology and world-class infrastructure,  Qatar  have already promised a wonderful experience for visiting fans. They have inaugurated four out of the eight planned venues for the World Cup and the work is progressing on schedule for the rest.

Interestingly, the World Cup will be held in the winter months of November and December for the first time ever. It will also be one of the major sporting events to be hosted in a post-pandemic world. As such, it is set to be a unique World Cup in many ways and Fowler feels it will be a brilliant event for fans and players alike.

“I actually think that the World Cup in Qatar will be brilliant,” Fowler, who is currently coaching SC  East Bengal in the  Indian Super League

(ISL), told Goal. While Qatar have had its fair share of critics over time, Fowler believes the Middle-East nation will defy all of them and put up a grand show when the World Cup rolls into town less than two years from now.

“All eyes will be on them. People will probably want them to fail but I don’t think they will. I think they will put up a great show and make it an unbelievably great spectacle and they will want to prove lots of people wrong,” Fowler mentioned.

The Liverpool great, who has 26 international caps for  England

is no stranger to the thrills and frills of a World Cup. He was part of the England side which reached the quarter-finals of the first-ever World Cup to be held in Asia, back in 2002.

He feels that England have now improved and are certainly among the best European footballing nations. As Asia’s second World Cup comes along, the 45-year-old believes the Three Lions will put up a good show in Doha.

“On paper, England always have had good teams. But it was always a bit worrying not because of England, but there were other good teams. Sometimes you look up and say that other European teams are slightly better. I think that’s always been the case. England now have got back a bit of parity because they have a few good quality players,” he said.

He also pointed out England’s brilliant performance in the 2017 U17 World Cup, which was also incidentally held in Asia (India),

with several stars from that title-winning team making it to the English national team including Phil Foden, Callum Hudson-Odoi and Jadon Sancho.

so their progressions have been good. Some of them have gone on to the U21 side, some of them into great Premier League sides and some even into the England national team. So there is scope for England to do well. We always have that belief that we would do well in tournaments.”

Fowler believes that the semi finalists from the 2018 World Cup will have the desire to perform in Qatar as well. With talented players like Marcus Rashford, Raheem Sterling and Harry Kane leading the team, 2022 Qatar World Cup will be an exciting tournament for English fans.

“Fundamentally, there are other teams as well who believe that they are as good as anyone else. So football is crazy at times. We all want our team to win but there will be one winner. You run that little bit harder, work that little bit harder. All national teams have unbelievably talented players and it’s a case of who wants that little bit more. And it is up to England to show the world that they want it more than anyone.

“It will be tough as all the other nations will be doing exactly the same.”

TOWNHALL MEETING: WHY WE MUST URGENTLY CURB DRUG ABUSE IN NIGERIA,...