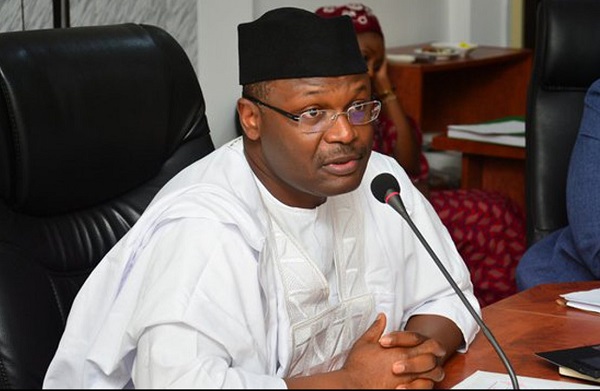 • EFCC, banks to be mandated to report suspicious transactions

The independent National Electoral Commission ( INEC) is going tough with political parties and their candidates in next year’s elections on how they source and disburse their campaign funds.

Yakubu spoke in Abuja during a policy roundtable conference on political campaign finance organised by The Electoral Forum (TEF).

At a separate forum yesterday, the INEC Chairman said 8,260,076 eligible Nigerians had completed the online and physical registration with students and other young Nigerians between the ages of 18 and 34 dominating the ongoing voter registration.

Yakubu, who was represented at the policy roundtable conference by the National Commissioner and chairman (Committee on Party Monitoring), Prof. Kunle Ajayi, said the commission was determined to track and ascertain campaign expenditure by politicians before and during the elections.

The commercial banks will be required to report all suspicious transactions ahead of the elections.

Failure to report any such suspicious transactions, he said, would attract prosecution.

“As long as we have not notified anybody that the race to the 2023 general election has started, we are not unaware of what anybody is doing. We follow the law strictly,” Yakubu said.

He added: “We have not officially declared notice for the 2023 general elections. But when we so declare, we will put our monitoring committees to motion, like the Central Bank of Nigeria, DSS, EFCC, the ICPC (commercial) banks and other law enforcement agencies. We have that plan already.

“Every candidate must be made to declare his bank asset; that is where they draw out their money. So we will make them to present their statements of account right from the onset.

“We will make it mandatory for them to turn in their bank statement so that if they say they are doing billboard and the account remains the same, then there is a problem.”

The commission also plans to check vote buying, according to Yakubu, who said: “We are going to establish finance monitoring teams and they will be among the electorate but they (politicians and political parties) won’t know.

“We are going to do it in a way that the influence of money will be reduced, because we want to make the electoral field a level playing ground for both rich and poor candidates and the electorate.

“Everybody will go on an equal economic level so that you won’t influence the voting pattern.”

His words: “If we insist on accountability, then you can begin to somehow sanitise the way political parties raise funds. I think what has happened is that we paid too much attention to the issue of electronic transmission of results, and somehow they quickly passed the Sections about raising the threshold. The civil societies did not pay much attention in their advocacy against this particular issue.

“Nevertheless, I wouldn’t advise or recommend that we delay the passage of the Bill on account of this particular issue. What we should be exploring are ways and means of ensuring that there is accountability about how these funds are raised and the spending ceiling is met as well as how the expenditure is done.”

Also speaking, the National Chairman of Inter-Party Advisory Council, Yabagi Sani, represented by its National Treasurer, Mr.Obidike Okolo, called for a strict enforcement of the regulations on election funding with a view to preventing the monetisation of the electoral process and improving the level of trust between the electorate and candidates.

He said the need to step up enforcement of the regulation on election funding was borne out of the imperatives of sanity and integrity in elections.

He said while the controversial Electoral Act Amendment Bill (2020), if assented to by President Muhammadu Buhari, would raise the ceiling of what a presidential candidate can spend on elections from N1 billion to N5 billion, representing a 400 per cent increment amongst others, there was need for its enforcement to ensure compliance with the provisions of the law on political campaign finance.

He said: “Political actors and commentators have been complaining that the new ceilings imply the monetization of the election process beyond the low-income groups in spite of their other qualifications. In this context, it is feared that women, youths and people living with disabilities will be the most excluded from the political process and governance.

“Further, there is the observation that the big political parties would hardly want to give their tickets to their members who are deemed not to have the capacity to generate either on their own, or, from wealthy donors to enable them cope with the big electioneering campaign funds.

“The more serious reservations about the potency of regulatory laws on elections is that such laws are hardly observed because of the poor or near-absence of enforcement mechanisms.

“It is an open secret that private sector corporations and public institutions and agencies mostly surreptitiously make huge donations for reasons of getting patronage from the government or as a result of coercion by government officials.

“In our view, at IPAC, much as we believe like most Nigerians that the new election funding limits by the new Act is on the high side, we are however more concerned about enforcement and compliance.

“To achieve this objective, we are recommending, among others, that the Independent National Electoral Commission should be supported by all stakeholders in the exercise of its regulatory role.”

The TEF is a multidisciplinary strategic think-tank aimed at strengthening electoral governance and accountability in Nigeria through the provision of data, critical and contextualized analysis and solutions to improve the credibility and integrity of the electoral process.

Speaking also yesterday at INEC’s quarterly meeting with media executives in Abuja, Yakubu said 8,260,076 eligible Nigerians have so far applied for inclusion in the Permanent Voters Register ahead of next year’s elections.

Majority of the applicants are youths and students, according to him.

Besides, Yakubu said over 101 associations now want to be registered as political parties.

There are currently 18 political parties.

Seventy-four others were recently deregistered by the electoral umpire for falling below required performance.

The revelation is coming 392 days to the next general elections in the country.

One of the groups seeking registration as a political party, he said, applied with a sheet of paper without an address.

He said: “And I asked if we are to rely on this application, to which address are we going to send the reply?”

The INEC chairman said another individual applied to register six political parties. He however explained that while the guidelines for the registration of political parties are specified in the constitution, the commission has a procedure which it would follow to consider the applications.

The FCT council election, he said, will be followed by two governorship elections in Ekiti State on 18th June 2022 and Osun State on 16th July 2022.

“In the case of Ekiti State, all the 18 political parties have indicated their intention to participate in the election and have already served the mandatory notices for their primaries to elect their candidates as required by law,” he said.

In addition to the end of tenure elections, he said six bye-elections are scheduled to hold on Saturday 26th February 2022 in Cross River, Imo, Ondo and Plateau states. He added however that three by-elections were still pending.

He said: “You may recall that the Commission suspended Ekiti East I State Constituency bye-election in March 2020 following its violent disruption by thugs. The election will now be combined with the state governorship election holding on 18th June 2022.

“The date for the Shinkafi State Constituency bye-election in Zamfara State will be announced after a thorough review of the security situation in the area, while the Commission awaits the declaration of vacancy by the Kaduna State House of Assembly in respect of Giwa West State Constituency.”

On the distribution of voters to Polling Units in the FCT, particularly the fact that 593 out of 2,822 (or 21%) of the total do not have voters, he noted that “this is because voters failed to take advantage of the expansion of access to transfer to these new Polling Units.

“The Commission looks forward to the support of media organisations to encourage voters who wish to transfer from their present polling units to new ones created as part of the Commission’s expansion of access polling units across the country.

“After all, your support was crucial to the success of the recent expansion of voter access to polling units for the first time in 25 years since the initial delimitation in 1996,” he said.

He insisted that the critical preparations for the 2023 General Election must be concluded this year.

He said: “For instance, the Continuous Voter Registration (CVR) which commenced in June last year has entered the third quarter.

As at Monday 17th January 2022, a total of 8,260,076 eligible Nigerians commenced the online pre-registration, completed the registration physically, applied for transfer to new voting locations, requested for replacement of their Permanent Voters’ Cards (PVCs) and updated their voter information records.

“The Commission has been publishing weekly progress reports of the exercise, including analysis of the distribution of online and completed registration by age group, occupation, gender and disability.

“Since the exercise commenced in June last year, the Commission has so far published 36 weekly reports which show a consistent pattern of young Nigerians between the ages of 18 and 34 constituting the largest majority of registrants.

“In terms of occupation, students constitute the largest majority of registrants, which is consistent with the dominance of young Nigerians as voters.

“We are aware that Nigerians want to know when their PVCs will be available for collection.

“For those who have completed the registration, the Commission is right now undertaking the most comprehensive cleaning up of the data to ensure that only eligible citizens are added to the voters’ register for the 2023 general election.

“We will share our findings with Nigerians very soon. The actual dates for the collection of the PVCs nationwide will also be announced very soon.”

For emphasis, he noted that the Bimodal Voter Accreditation System (BVAS) will be deployed in the FCT elections, which is the second major election after the Anambra governorship election held in November last year.

The 68 constituencies cover extensive urban and rural locations sharing border with five states in the North Central and North West parts of the country.

“This is yet another opportunity to pilot the efficacy of the BVAS in a different geographical, geo-political and electoral context.

“The same technology will be deployed in all forthcoming elections across the country.

“Similarly, for all elections going forward, Polling Unit results will be uploaded in real-time on the INEC Result Viewing (IReV) portal,” he said.