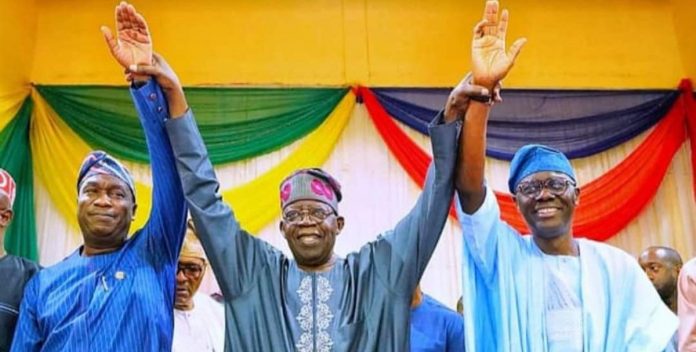 Tinubu held up both men’s hand after a Lagos APC stakeholders meeting held at the Adeyemi Bero in the Alausa area of the State.

There had been speculations that Mr Sanwo-Olu wasn’t guaranteed a second term ticket of the party.

But Mr Tinubu’s endorsement may have put paid to such rumours.

Mr Tinubu, who is also vying to fly the APC’s flags in the upcoming presidential elections is a former Lagos State Governor and popularly believed to be the state’s ultimate political godfather.

HERITAGE BANK EMPOWERS ELDERLY CAREGIVER WITH N15M IN “THE NEXT TITAN...

KANKARA ABDUCTION: THOSE USING OUR CHILDREN AS PAWNS MUST BE HELD...