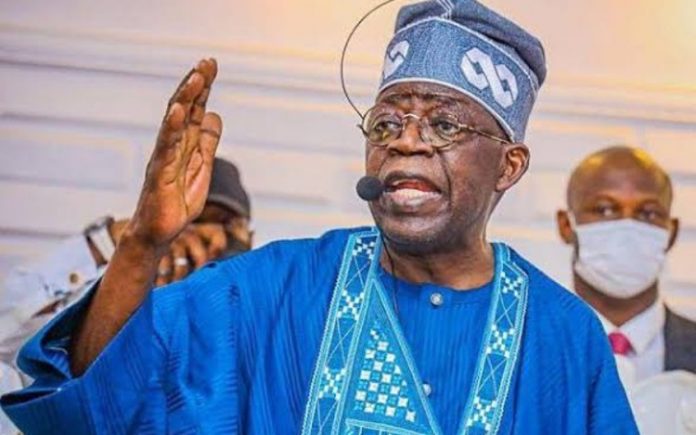 The National Leader of the All Progressives Congress (APC), Bola Tinubu, has promised to fight terror to the very end if elected as the 16th President of the Federal Republic of Nigeria.

Tinubu disclosed this while delivering his remark at the on-going APC’s special convention at the Eagle Square, Abuja on Tuesday.

The former Governor of Lagos State also promised to hit the ground running from day one.

He said, “I will fight terrorism and insecurity to the very end and erase terror from our land. My experience as Executive Governor of Lagos makes me unique among other aspirants. I am competent to start from day one.

“Here comes a time in a nation when the hopes of the moment. Let not the destiny of this land be stolen because we did not do what was meant for us to do at this critical moment. Remember, we formed this party not simply to wrest power from a wrong and failing PDP.

“We formed this party to give the people of this land the progressive good governance they deserve so that they may live as well and as peacefully as any people on the face of this earth. This corrective journey began with the election of President Muhammadu Buhari. At this convention, we must take the next step toward the proper and necessary direction.

“In 2015, the All Progressives Congress won the election to halt the drift in our nation’s governance, redirect our path, and make clear our national priorities We dedicated this party to the guiding principle that government must be for the benefit or each and every Nigerian before it is for the benefit of any single one of ns, No one is above legal rule or regulation. Likewise one is too low for justice and compassionate governance cover or protect him.

“Within this context, the APC under President Muhammadu Buhari has governed with patriotic and disciplined commitment this past seven years. The Buhari government has championed needed reforms, ranging from an innovative petroleum industry law to measures that are aimed at improving power and electricity generation for all Nigerians.

Government has invested heavily in building modern airports and railway network and roads. Every Naira is better managed than in prior administrations.

“This greater fiscal probity was achieved despite the vast reduction in national revenue caused by the COVID and recurrent global economic downturns. The Buhari government has done more with much less than its PDP predecessors did.

The successive PDP administrations did next to nothing with the plenty they had. What they did with our nation’s abundance is no secret. But what they did not do was even a greater embarrassment.

“They left abandoned infrastructure projects all across the nation. The APC completed them. They allowed ISWAP/ Boko Haram to erect strongholds. The Buhari government has been compelled to wage great war against these threats because of the decade of neglect by the PDP.”

This was confirmed by Nairametrics at the on-going APC’s special convention and primary on Tuesday.

Jigawa State Governor Badaru and Senator Borofice in agreement with APC Northern Governors for power to shift to the South, said they are trained for be fair, just, as they withdrew from the race and stepped down for Tinubu

According to them, they took the decision not because they are weak but to promote the sportsmanship spirit of the Northern governors, who had agreed that the next President of the nation should come from the Southern part of the nation.