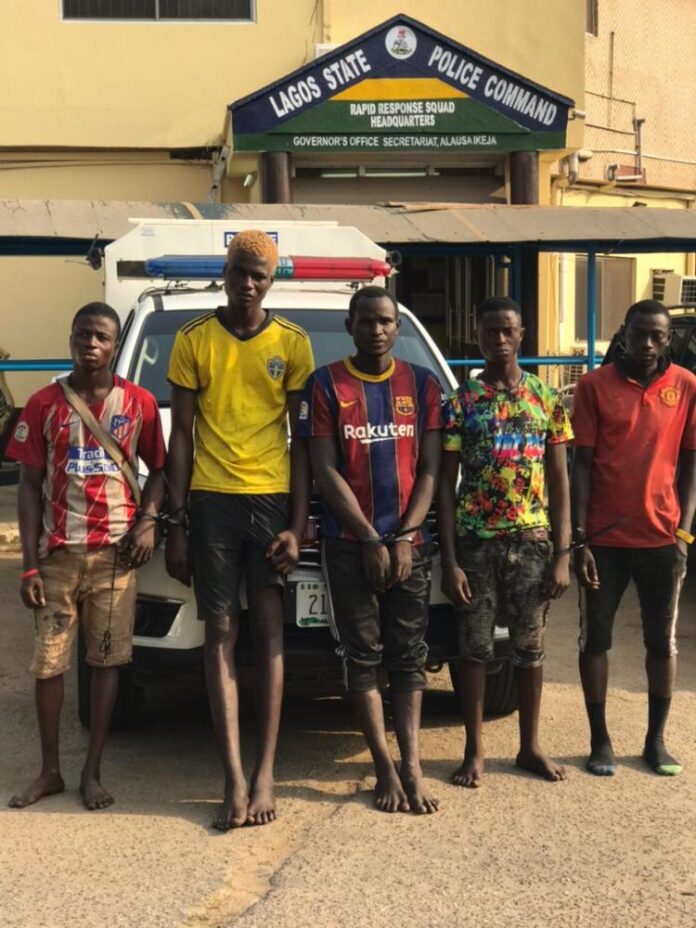 Pursuant to its commitment to further reduce crime and criminality in the State, the Lagos Police Command, between Thursday night and early hours of Friday 12th February 2021, arrested eight (8) suspected traffic robbers in Ketu Area of Lagos State.

Five of the suspects were arrested on Thursday 11th February, 2021, at about 1030pm, by a team of RRS operatives led by the Commander, Rapid Response Squad (RRS), CSP Olayinka Egbeyemi around Motorways end of Ketu while the other three (3) suspects were caught in the act by another RRS patrol team around 6am on Friday, 12th February, 2021.

One of the suspects, Amos Abayomi, who was arrested with a machete in between traffic in the morning of Friday, 12th February, 2021, in Ketu, Lagos, disclosed that he use to rob in traffic with a syndicate of other hoodlums especially in the morning and at night.

He further explained that there were instances where motor boys working in Ajelogo Park, Ketu would use their trucks to block the highway at dawn thereby creating artificial traffic so that they can feast on motorists and commuters held in traffic.

Abayomi, who had dispossessed a young lady of her Tecno Spak 4 phone, shortly before he was arrested, noted that traffic robbery at dawn and night was all he does for a living. He also disclosed that he had handed over the phones he collected to one of his colleagues, Akube (now at large) before he was arrested.

Abayomi, an Eiye cult member, also confessed that Monday Obayemi, who was equally arrested with assorted hard drug, robs and sells hard drugs in traffic to the suspects and other criminals on a daily basis.

Items recovered from the suspects were weapons, assorted charms, mobile phones, wraps of substances suspected to be
cocaine and other hard drugs.

The Commissioner of Police, Lagos State, CP Hakeem Odumosu, has directed that the suspects be transferred to the State Criminal Investigation Department, Panti, Yaba for discreet Investigation and prosecution, as the command will not leave any stone unturned in getting the state rid of criminals and hoodlums.

THESE 4 BILLIONAIRES WILL EARN ABOUT N1.2 BILLION FROM INTERIM DIVIDENDS...