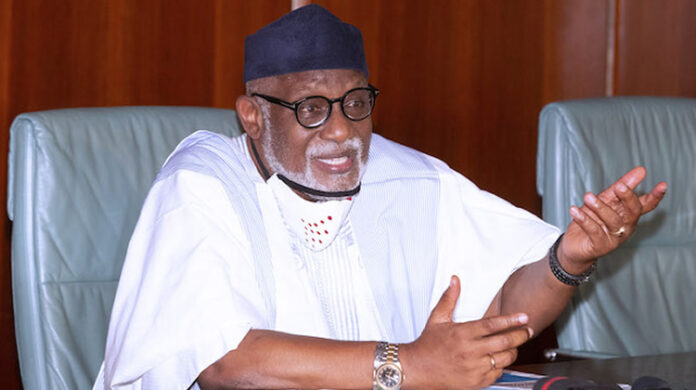 THE Agbekoya Farmers Society, on Sunday, threw its weight behind the quit notice by Governor Rotimi Akeredolu of Ondo State to Fulani herders inside Ondo State forest reserves.

The association also warned that no harm must come to Sunday ‘Igboho’ Adeyemi in Ibarapa Local Government Area of Oyo State.

A statement by its National Publicity Secretary, Chief Olatunji Bandele, quoted the President-General of Agbekoya, Chief Kamorudeen Okikiola, as saying that Governor Akeredolu, as the chief security officer of his state, has the constitutional powers to protect the lives and properties of the people of Ondo State.

Chief Okikiola reiterated that the governor gave the order in view of the series of killings and kidnappings by the Fulani herdsmen and armed bandits that have claimed the lives of innocent sons and daughters of Ondo State.

According to Agbekoya: “A sitting governor of a state cannot, because of the constitutional rights of other tribes to live among his people, close his eyes and fold his arms against other tribes engaging in criminal acts that are inimical to peace and socio-economic activities within his state.

“We are all witnesses to the killings and kidnapping going on in Ondo State and the entire South-West and these have made the region’s governors set up another security outfit known as Amotekun to complement the efforts of  Police and other security agencies.

“Moreover, government forest reserves are not set up for animal grazing. Rather they are exclusive reserves for the economic earnings of the government.”

Similarly, the association kicked against the Inspector-General of Police order to arrest and bring Sunday Adeyemi Igboho to Abuja, describing the order as being biased.

They said: “The armed Fulani herdsmen, kidnappers and bandits who have been kidnapping and killing innocent sons and daughters of Yorubaland have never been arrested and prosecuted since the inception of this administration.

“Agbekoya is against the arrest of our son, Sunday Adeyemi Igboho, who is defending his people, the Ibarapa sons and daughters from being killed by armed Fulani herdsmen, kidnappers and bandits.

“And if anything should happen to him, that will be the beginning of a war between Yoruba and the Fulani herdsmen in South-West.

“It is also in our records that the armed Fulani herdsmen in the last five years have killed 1,205 farmers in Ibarapa and nothing has been done to bring the killers to book.

“The people and farmers in Ibarapa are no more safe in Ibarapa area of Oyo State because of the invasion of armed Fulani herdsmen, kidnappers, and bandits from other West African countries, including Nigeria, who are terrorising and killing Yoruba people in their fatherland.

“Governor Seyi Makinde’s intervention and utterances have not shown the love and care for people who voted him to power, especially the people of Ibarapa at this time when they need him to protect their lives and properties.

“We expect Governor Makinde to be more responsive, caring and firm in his intervention in this Ibarapa saga.”