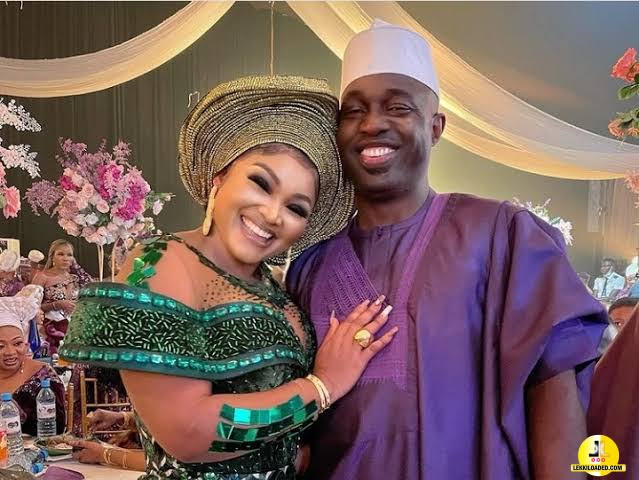 Popular Nigerian actress and film maker, Mercy Aigbe, has reportedly packed out of her new husband’s house ahead of the arrival of Adekaz’s first wife.

This comes barely months after the union of Mercy Aigbe and her husband, Kazeem Adeoti, a.k.a Adekaz who once reportedly claimed to be using the union as a way to boost his political career.

According to a controversial blogger, the actress has been forced to move out of the house as the first wife of her husband plans to return to the country from abroad to claim the house which she built together with her husband.

Information reaching Vawulence headquarters be say Aunty Mercy Aigbe don go back to her house for now oo as the first wife and the husband gather build the house together ni before Aunty Carry her two left legs enter their marriage dabaru am oo and as it is matter still Dey ontop the house, the wife Na abroad based so as Aunty Dey come house Den Dey enjoy she don think say the first wife no go come 9ja come claim her property, you see why I say believe all these yeyebrities at your own risk.

Adding to the claim, the blogger revealed that the car Mercy Aigbe received as a gift from a brand was actually a false claim to cover up the source which was from Adekaz.

Close source also reveals say the motor wey Aunty claim say Na brand give am, Na Adekaz handiwork as that one really needed to convince Aunty say him ready them come Dey lie ontop brandas it is now the matter go soon turn yam pepper scatter scatter ooo, close source to the family also reveals that the plan was to use Mercy Aigbe accomplish his political career that he once confided in one of his friends about it, mercy on the other hand sef wan upgrade her puna to politics levels, so Na who wan d!e jam who go k!ll am,the two of them fit each other, make una stand well well oo because if bottles begin Dey fly make e no go meet una ooo. I come in peace.”