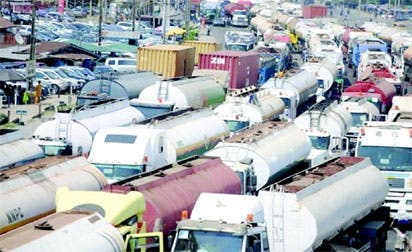 The situation, which resurfaced two weeks ago, has worsened, as recalcitrant commercial motorcyclists, popularly called Okada riders, in their hordes, engaged in a violent clash with truck drivers, as a result of an accident that reportedly claimed the lives of three of their (okada riders) colleagues.

As a result of the situation, the expressway was in a standstill for the better part of the day, spilling over into midnight.

The gridlock was a result of the on-going construction work around the Mile-2-Badagry expressway, under the pedestrian and flyover bridges, which spilled over to the Oshodi-Apapa expressway.

The chaotic situation, however, worsened on Wednesday, following a violent clash by the okada riders around 6 pm, as relevant authorities like men of the Lagos State Traffic Management Authority, LASTMA and Police were overwhelmed as they watched truckers take over the entire stretch of the road.

The irate okada riders went berserk when a container fell on three of their colleagues in an auto crash around Mile 2.

The riders attacked every motorist at sight, vandalising their vehicles in the process.

The okada riders and truck drivers seized the situation to ground all business activities, while other motorists ran for their lives.

A motorist, Mr. Hassan Ajao, who plied the axis, narrated his narrow escape from the rampaging okada riders.

Ajao said: “I just closed for the day and on my way home, we got stuck in traffic for hours. In an attempt to find a way out, we saw a large number of Okoda riders moving towards our direction violently, brandishing different types of weapons.

“By instinct, we abandoned our vehicle and took refuge in a nearby bank premise, while still watching our car. We later learned that a truck driver killed some okada riders which led to their colleagues protesting.

When contacted, Special Adviser to the Governor on Transportation, Mr. Toyin Fayinka, said: “Though, there has been significant progress in this area, particularly on the road construction site; lots have been fixed.

“There has not been movement on this axis due to road construction by Hi-Tech particularly from Sunrise to Tincan.

“So, I am to start a conversation with the Federal Controller of Works to talk to Hitachi. We equally suspect foul play on the part of the unions.”

In his reaction, President, Association of Maritime Truck Owners, AMATO, Remi Ogungbemi, said: “The Apapa traffic has become a commercial entity for some people that are benefitting from the situation.”

“Everyone involved in the management of traffic in that axis should be redeployed and new operatives deployed.

“The corruption there has taken a higher dimension and it will take the collective effort of everybody to deal with it once and for all.”

FIDELITY BANK: FEES TO THE RESCUE

‘PASTOR’ ARRESTED WITH 3 DRUMS OF MKPURU MMIRI IN AKWA IBOM...