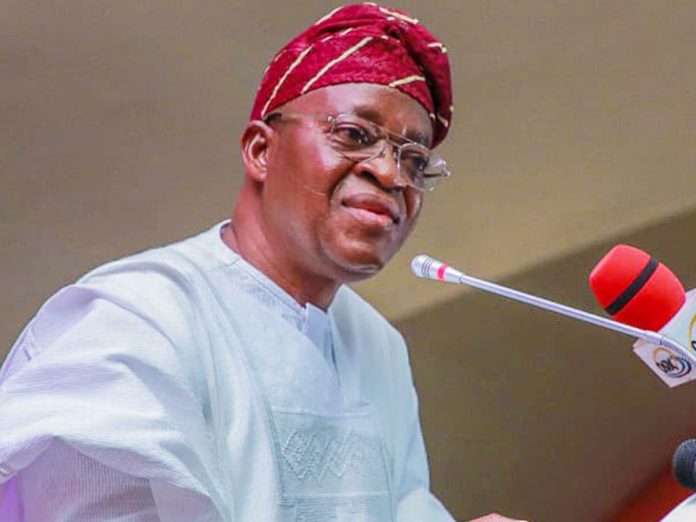 The Osun State government under Governor Gboyega Oyetola is fast driving infrastructural development across the state.

One of the reasons the Osun State Governor, Gboyega Oyetola has remained in the good books of Osun people is the massive infrastructural development that the state has witnessed since the governor assumed office in November, 2018.

At the beginning of his administration as incumbent governor, he commissioned four projects as part of the activities marking his taking over.

The commissioned projects were: upgraded Technical College, Oba Sir Adesoji Aderemi East Bypass, Obafemi Awolowo Motorway and Fakunle/Unity High School, all in Osogbo. Prominent among the projects is the Awolowo Motorway, which is the dualisation of 40km Osogbo–Ikirun–Ila odo, Kwara State Boundary.

The road construction projects created over 5,000 direct jobs in the state and 12,000 indirect jobs for welders, plumbers and bricklayers, as well as food vendors.

Though a good number of projects were completed by the governor, the flagship is the dualisation of the 45 kilometer Osogbo-Ikirun-Kwara State Boundary road.

Consequently the people of Osun state are equally urging the governor to make move on NNPC,s roads projects so that Osun could benefit on the project as to assist in the completion of Osogbo (Old-garage) to Ikirun junction road (20.5 kilometers) and Ikirun-Ila Odo- Kwara State Boundary road (16.55 kilometers).

Since the state government signed a N17.8 billion contract agreement with SAMMYA Construction Company Limited for the Dualisation of the 45kilometer road, the project segmented into three of Osogbo-Dagbolu (International market) to Alamisi Market in Ikirun (9.52 kilometers); Osogbo (Old-garage) to Ikirun junction road (20.5 kilometers) and Ikirun-Ila Odo- Kwara State Boundary road (16.55 kilometers), the state government has been receiving a lot of commendations from both the people living in the state and road users using the ever busy Osogbo-IIorin road.

The project contractor, SAMMYA Construction Company Limited has not only demonstrated its capabilities in executing the project technical wise, but it has also displayed a rather solid financial war chest that only few construction companies can boast of, thereby clearing any doubts about the success of the project. This is the submission of one Kunle Folorunsho who resides in Ota-Efun, Osogbo the state capital.

Chairman of the rulling All Progressives Congress (APC) in the state, Prince Gboyega Famodun, who commented on the dualisation old garage to Kwara State boundary, said the contractor handling the project was very much on site and doing well.

Famodun stated that there is tremendous achievements and the work is getting to the outskirts of Ikirun town already.

He however submitted that funding was the bane to full actualisation of the project, saying it was affected by fund but that the government would address it, not withstanding.

The APC chairman stressed that it was a federal government road but that the state government took over in the form of collaboration, saying that the government of Governor Gboyega Oyetola will not relent untill he completes the project.

Also an APC chieftain, Mrs. Adeola Egbedokun, contended that the contractor handling the project had remained committed to its speedy completion.

She urged the state government to make available everything that is needed to complete the project in a very shortest period.

Equally a civil servant who does not want his name mentioned, told THISDAY that the contractor handling the project should be mobilised with funds for its full completion.

He remarked that the contractor is doing good job on site and urged the state government, to as a matter of urgency, make adequate funding a watchword.

About Eight years down the line since work commenced on the multi-billion naira project, opinions of people of the state about the performance of the contractor on the job has been nearly the same, with people praising the technical knowhow that has never been seen in the state before now being employed by SAMMYA in executing the project.

However, Adeyi Olakunle who spoke with THISDAY, said: We are celebrating an enduring legacy, a legacy that has been through storms, insult and many other challenges.

“Oyetola has done what Awolowo aimed to do. The dream of Awolowo was to ensure every Nigerian is literate. All what

Oyetola have been doing in fulfilment of Awolowo’s dream. Aregbesola’s behavior is similar to that of Awolowo. He has transformed Osun in spite of the financial and political challenges. I thank God for Oyetola,s success.”

Speaking, Aderonmu Kunle said Oyetola remained a great man, adding that his projects are unforgettable because they are developmental. “Oyetola is the first Nigerian politician to bring back history and honour Nigerian past leaders like Oba Aderemi and Awolowo. Oyetola has laid wonderful foundation for the progress of the state,” Kunle said.

Commenting on the project vis-a-viz the quality of technology being employed by SAMMYA, a trader at Igbona Market in Osogbo, Madam Sinatu Layoonu, said the contractor SAMMYA has proven strong capablity in handling the job with the deployment of brand new machineries for road construction, adding that the workers handling the project have also demonstrated sense of dedication to the admiration of people of the state.

“Many of these machines that SAMMYA workers are using for the construction are new to many of us in Osogbo. They are not only new, but are also very appropriate, at least to some of us, who have never seen such huge construction machines, for the quality of work people of the state are expecting them to deliver. We in deed very grateful to the governor for given such a project to a serious company like SAMMYA”, she said.

Similarly, a shop owner at Ayeitoro area of the state capital, Chuks Ezemokuai, noted that despite the rain, the uncompromising spirit of SAMMYA has ensured work progress steadily on the project and urged Governor Gboyega Oyetola to fund the project.

He added, “when the company initially commenced on the project and the contractor, SAMMYA Construction started work on the road, I, like many others doubted the capability of the construction firm because we were not familiar with that name, but it was not long before we were all proved wrong and SAMMYA won our hearts with the quality of machines and the expertise of its men constructing the road. Indeed, we are pleased with SAMMYA.”

Speaking on how activities of the contractor handling Osogbo-Ila Odo Kwara Boundary road, SAMMYA, has aided businesses of petty traders especially those that have their shops close to the construction site, Mrs. Beatrice Olawoore, said many of petty traders have immensely benefitted from the on going project because the construction workers have been patronising them.

She said: “Many of us petty traders have benefitted from the presence of SAMMYA’s men on this road because they buy a lot from us ranging from snacks to drinks and stuffs like that, they have aided our business very well. I believe this is part of the gains of this on going construction work, at least if the construction is not going on here, these men will not be around here and our sales would have remained what it was”.

Similarly, answering questions on how the construction work has improved youth empowerment, one of the drivers recruited by SAMMYA from the state, Yunus Adegboyega from Oba Ile, a town in Olorunda local government area of Osun state, explained: “I got a hint that SAMMYA was employing drivers and I approached its office. That was how I got the job.

“The salary is very attractive and there was training for all the workers. Besides empowering us financially, SAMMYA is also exposing us to skills in our various areas that are very new to many of us. The number of youths from Osun state that have been employed into various departments and sections of the company since the work began on the road is well over 500”.

While counting the gains of Osun massive investment in infrastructural development vis-a-viz the construction of Osogbo-Ila Odo-Kwara Boundary road, a labour leader in the state, Comrade Kazeem Oladepo challenged administrators in the country to borrow a leaf, not only from the model adopted to finance the project, but also the sheer dedication to duties which he said the contractor has shown in making sure that the work is done to specifications.

Speaking further, the employee of state Ministry of Health, added that the construction of the road has demonstrated the readiness of government to place the Osun in the league of developed states and the choice of SAMMYA, a pointer to the resolve of Oyetola,s administration to permanently etch his name in the minds of people in the state as a governor that lift the state to enviable heights in terms of infrastructural development.

A Resident in Ikirun One Kolawole Ajani commended both state government and SAMMYA Construction Limited for making the project a good reference point for the development-driven administrators in the country.

For the monarch, the dream to transform the state’s infrastructural amenities as conceived by the then governor was actually being given a life by the contractor handling the project, charging all those involved in the project to ensure that the same vigor with which they commenced the work with is retained throughout the duration of the project.

The founder of Sword of Spirit Ministry, Eweta, Pastor Israel Wemimo, said the major gain the state is recording through the ongoing Osogbo-Kwara Boundary project, was in the area of empowerment.

He declared that those youths in Ikirun and adjoining communities, who could not be absorbed by the contracting firm handling the work at the moment, should wait when the contractor will shift full attention to the part of the project that traverses the community.

Similar to the view expressed by this clergy man is the one held by Chief Tadese Esuleke of Oloba Compound, Osogbo, who was of the opinion that, besides giving the state a facelift, employment opportunities created through the project and the perceived readiness of the contractor, who he said was not planning to use and dump those employed, but in addition, empower them by giving them training in specific vocations, is simply the continuation of youth empowerment efforts of the previous government.

He said: “Many youths in the state, who could not get opportunity in OYES are beginning to turn their attention to SAMMYA, the contractor working on Osogbo-Kwara Boundary road. Honestly, this work is assisting in mopping our streets of these hitherto idle young men. You can call it an indirect way by government and its partner the contractor to empower young ones.”

Speaking on behalf of students’ movement in the state, a former Osun State Chairman of the Joint Campus Committee (JCC) of National Association Nigerian Students (NANS), Comrade Bosede Safety said: “People are saying youth empowerment is one of the gains recorded by the state through the project of Osogbo-Kwara Boundary road but beyond that fact, I think the preservation of lives and properties of the people that will use that road.

The rate of accident on that road before this construction work is relatively high. Lives and properties have been lost and that will have to stop now with the expansion and reconstruction work going on.”

Also Commenting on Osogbo – Ila Odo, the Commissioner for Works and Transport, Remi Omowaye, said the state government had provided resources that are needed to do the dual road to Ikirun from where the last administration stopped. So we are not abandoning any projects.

“Don’t forget we are three years in office. Some of these projects were awarded 2012/2013. So the fact that they are yet to be completed, is no fault of ours, but we will ensure that some things are done.

If you go there now you will see that the contractors are on ground working,” Omowaye said.

FRSC boss calls for collective vigilance against road Carnage in 2020