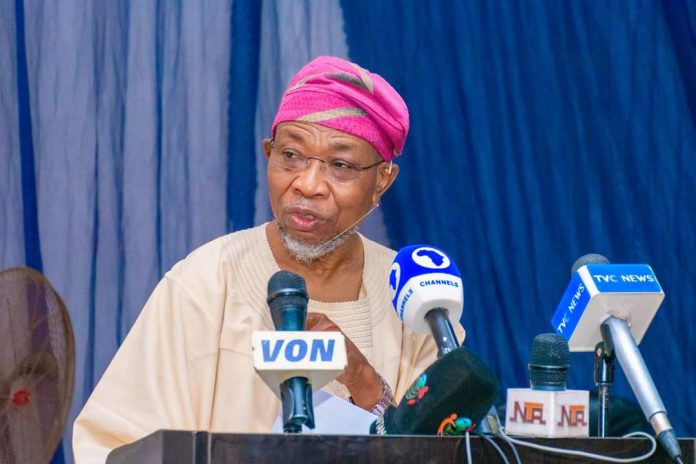 The Honourable Minister of Interior, Ogbeni Rauf Aregbesola has commended the transformational programs initiated by the Commandant General of the Nigeria Security and Civil Defence Corps, NSCDC, Dr Ahmed Abubakar Audi within the last one year which has raised the morale of personnel and changed the narratives of the service in addition to the visible improvement in the dressings of officers of the service.

In a press statement e-signed and released to the National Association of Online Security News Publishers, NAOSNP by the Corps’ Spokesperson, DCC Olusola Odumosu stated that, “In a bid to asses the level of performance and achievements recorded so far by the Ministry of interior with respect to its mandates and identifying priority areas which requires improvement towards the realization of good governance, NSCDC hosted the 3rd and 4th Quarter 2021 Performance Review Meeting of the Ministry and its Services/Departments from July To December 2021.”

According to Odumosu, “The Meeting which was chaired by the Minister of Interior, Alhaji Rauf Aregbesola had in attendance, the Parmanent Secretary, Dr. Shuaib Belgore, Commandant General, Nigeria Security and Civil Defence Corps, ably represented by Ag. DCG Administration, Zakari Ibrahim Ningi, fdc, CG Nigeria Immigration Service, Correctional and Fire Service as well as the Director/Secretary Board, Hajia Aisha Rufai and other Directors from the Ministry of Interior.”

“Reviewing the activities of the various Agencies and Departments under his supervision, the Minister spoke extensively on raising the bar of performance and accountability of the Ministry. He expressed satisfaction over the performance of its services and emphasized on the need to rekindle efforts in tackling the insecurity challenges bedeviling the nation.”

He assured of his readiness to give quality leadership to the various services under his Ministry for improved service delivery and lauds the Commandant General of Nigeria Security and Civil Defence Corps, Dr Ahmed Abubakar Audi, mni and the entire Corps for living up to its responsibilities within the period under review.

He commended the various transformational programs initiated by the Corps within the last one year which has raised the morale of personnel and changed the narratives of the service in addition to the visible improvement in the dressings of officers of the service which he noted upon his arrival at the Corps National Headquarters, Abuja.

He applauded the CG NSCDC for the initiative in forming the Female Squad which is helping to protect School children from the clutches of kidnappers in many parts of the country and the introduction of additional New Uniform to its array of uniforms for better public appearance and performance.

Aregbesola emphasized on synergy and collaboration between its various agencies and charges NSCDC and Federal Fire Service to work out modalities towards effective partnership in the area of security coverage and protection of firemen and women who are often exposed to horrendous harassments and molestations in the cause of carrying out their lawful duties on one hand and with the Nigeria Correctional Service to provide support in fortifying Nigerian Prisons towards putting an end to the rising wave of jail attacks in the country.

In his remark, Dr Shuaib Belgore, Permanent Secretary, Ministry of Interior emphasized that the take home from the meeting for the different agencies and departments under the ministry of Interior is for all stakeholders to put on a new toga of quality service and redouble efforts towards achieving the ministry’s set goals.

He reiterated that the various security challenges the nation is facing today is surmountable if we all contribute our quota by doing the right thing at the right time.