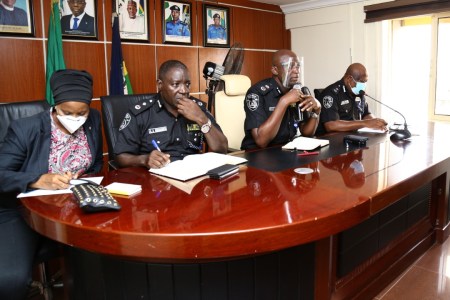 The Commissioner of Police, Lagos State, has frowned at the lackadaisical attitudes of banks and financial institutions in Lagos State to the security of bank facilities and cash in transit.

The Commissioner of Police, at a meeting held on Tuesday 1st December, 2020, with Banks and Cash In Transit officials, at the conference hall of the police command, GRA, Ikeja, kicked against conspiracy, security lapses and unprofessionalism suspected to have been exhibited by banks and CIT officials in the attacks on bullion vans in Lagos State recently.

In particular, the police boss referred to the attack on a bullion van at Langbasa- Ajah Area of Lagos State recently, where there was no adequate and/or official deployment of men for such movement. The two (2) policemen allegedly on the escort movement were procured illegally and without the knowledge of the command. “This kind of a movement is condemned and unacceptable in totality”.

He therefore ordered that henceforth, adequate security must be provided for their facilities and movement of cashes (cash in transit) after due approval for such movement by the Commissioner of Police as the police command will no longer tolerate any kangaroo security arrangement for cash in transit in the state.

The police boss also directed that Standard Operating Procedure on Species Escort (movement of valuables) must be sustained; noting that there must be minimum of two (2) operational vehicles conveying fully armed policemen escorting a bullion van which must be fully armoured.

Similarly, in compliance with traffic rules, the Commissioner of Police strongly warned them against driving on One Way and BRT corridors, driving of bullion vans without or with covered number plates, breaking of traffic light and reckless driving on highways. He further warned that bullion vans must be roadworthy and standardised by the State Commands Transport Officer.

CP Hakeem Odumosu then ordered Area Commanders, DPOs and Heads of Departments to henceforth stop and contravene any bullion van on movement without due compliance with the stipulated security arrangements and traffic regulations in the state. He also warned the Commanding Officers of Police Mobile Force in the state to desist from deploying men to banks and financial institutions without due approval of the Commissioner of Police.

In addition, CP Hakeem Odumosu encouraged banks to fortify security in their facilities by installing more sophisticated CCTV cameras that have 100 day recording capacity so as to have a backup and source of evidence in police investigation of any incident within their areas of responsibility.

At the end of the meeting, CP Hakeem Odumosu formed a committee for the implementation of the rules and regulations of providing security to banks, financial institutions and movement of valuables (cashes) within the state. The committee comprises the Deputy Commissioner of Police, Department of Operations, DCP Mohammed Ali, Officer in Charge of Bank Guards, Lagos State Command, two of the Chief Security Officers of the bankers and two representatives of the Cash In Transfer firms.

ANNOUNCEMENT OF A NEW CORE INVESTOR IN POLARIS BANK