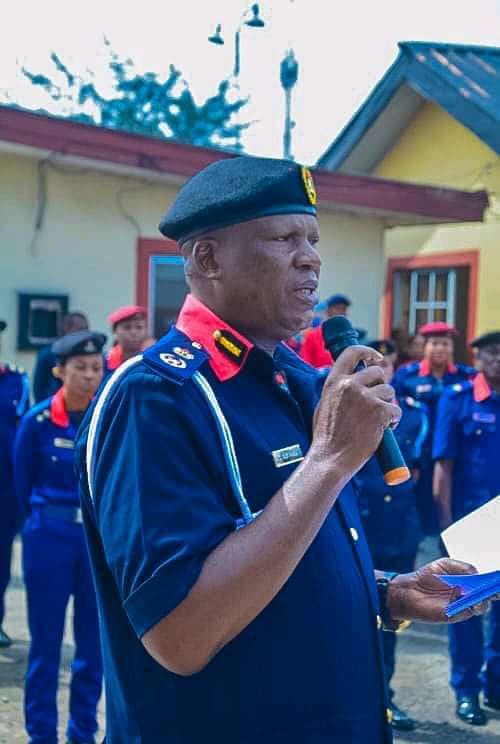 The Commandant of the Nigeria Security and Civil Defence Corps, NSCDC Rivers State Command, Commandant Abu Abdu Tambuwal has issued a strong warning against unprofessional behaviour and complacency in the discharge of statutory duties by officers and men of the corps before, during and after the Id-el fitri celebration.

In a press statement e-signed and released to the National Association of Online Security News Publishers, NAOSNP by the Command’s Spokesperson, DSC Olufemi Ayodele stated that, “The State Commandant of the Nigeria Security and Civil Defence Corps Rivers State Command, Abu Abdu Tambuwal has issued a stern warning against unprofessional behaviour and complacency in the discharge of statutory duties by officers and men before, during and after the Id-el fitri celebration.”

According to the statement, “Tambuwal made this call in an emergency briefing at the State Headquarters of the command which had in attendance all Heads of Department, Divisional Officers, Unit Commanders and the rank and file. He stressed that his administration will not tolerate any act of overzealousness, arrogance and unethical practices that could trigger negative feedbacks from the Public.”

“The command helmsman affirmed that 1595 personnel have been deployed to provide adequate security across the State noting that the officers and men must justify their efficiency and productivity by imbibing the fundamental culture of diligence to duty, humility, Integrity, loyalty and respect for the constitutional rights of citizens while carrying out their statutory responsibilities.”

Tambuwal maintained that the need to fortify the security architecture of the state cannot be overemphasized as the festive period is often characterized with social vices and criminalities. He enjoined the personnel to take charge of their respective duty posts with their eagle eyes widely open so as to nip in the bud all nefarious activities that could jeopardize free movements and tranquility during the festivity.

“The Nigeria Security and Civil Defence Corps is noted for civility and professionalism; as grass root security personnel you are expected to be courteous, apt, Intelligent and temperate in your disposition; the proof of your training and re-training is regimental discipline which must never be compromised”.

He further reiterated that the Command would continue to synergize with relevant sister agencies and the government by sensitizing the public on the need to shun all act of economic sabotage to the nation. He said the security agencies in the State must collaborate effectively to combat vandalism of Oil pipelines, Oil theft and Oil bunkering activities noting that no circumstance whatsoever would deter the command in the fight against criminalities in Rivers State.

PRESIDENTIAL THINK TANK ON DEFENCE AND SECURITY DISTANCES SELF FROM ALLEGES...

WHY AGEGE DESERVES A MUDASHIRU OBASA