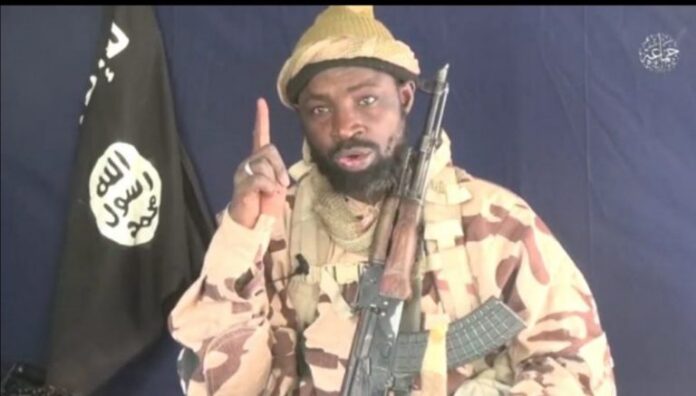 AFP had earlier reported that Shekau was seriously injured when he shot himself in Sambisa Forest on Wednesday after his faction was surrounded by ISWAP fighters.

He was said to have shot himself in the chest, but his followers managed to escape with him.

But HumAngle online, noted for Boko Haram/ISWAP reports, said the wanted Boko Haram fighter died after he blew up himself.

He died along with yet unidentified ISWAP commanders.

The Nigerian Army said it was studying the report from AFP that Shekau had died.

Army spokesman, Mohammed Yerima said: “We are investigating” the death of Shekau.

It was gathered that ISWAP, which had broken away from the Shekau-led Boko Haram faction in 2016 after pledging allegiance to the Islamic State (ISIS), raided the group’s hideout using multiple gun trucks.

It was reported that Shekau’s enclave was tracked down by ISWAP using its forces based in the Timbuktu Triangle. His fighters were killed in the process, followed by a long gunfire exchange between the invading group and Shekau’s bodyguards.

HumAngle reported that after his bodyguards were subdued, Shekau surrendered and engaged in an hours-long meeting with the ISWAP fighters.

During the parley, he was asked to voluntarily relinquish power and order his fighters in other areas to declare allegiance to ISWAP’s authority.

The negotiators had expected Shekau to issue a statement.

Sources within the insurgency, however, said that Shekau who secretly had a suicide vest on eventually blew himself up alongside everyone present during the negotiations.

But quoting intelligence sources, AFP , on Thursday, reported that after a series of clashes, Shekau and some of his fighters were surrounded on Wednesday by ISWAP jihadists in Boko Haram’s Sambisa forest stronghold, where they demanded he surrendered.

“To avoid capture, Shekau shot himself in the chest and the bullet pierced his shoulder,” the source said, adding, “He was badly injured.”

Shekau made international headlines when his men kidnapped nearly 300 schoolgirls in Chibok in 2014.

He has been reported dead many times since Boko Haram first began its insurgency in 2009.

Shekau had been declared dead many times by the military authorities.

But each time, he resurfaced in a video, poking insults at President Buhari and the military.

The Americans have a long standing $7 million bounty, about N2.8billion on his head.

The United States Department of State had designated Shekau as a terrorist and in June 2013, it announced a reward of US$7 million for information leading to his capture.

This was done under its Rewards for Justice programme

In contrast, the Nigerian military announced a N50 million, about $100,000 bounty for his capture.

But in his videos, Shekau always mocked those hunting for him, claiming he was invincible and that he “could not die except by the will of Allah”.