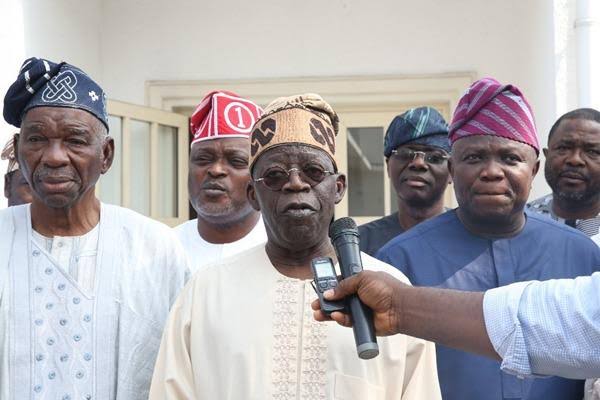 The reports that Tinubu had dumped Sanwo-Olu for another loyalist, Mustapha Olorunfemi, ahead of the May 23, 2022 governorship primary in the state has been finally put to rest as the Governor has declared that his nomination forms were paid for by Asiwaju Bola Tinubu himself.

The Governor’s Advisory Council, GAC, had maintained that it has cleared Sanwo-Olu to return in 2023, but it was not clear whether or not the national leader of the All Progressives Congress, Asiwaju Bola Tinubu, has endorsed the governor’s second term bid.

Just moments ago, Sanwo Olu revealed that “Asiwaju Bola Tinubu paid for my second term nomination and expression of interest forms to run for second term”.
GAC member, 85-year-old Prince Tajudeen Olusi and APC chairman in Lagos, Cornelius Ojelabi, in separate interviews with The PUNCH on Thursday, noted that Sanwo-Olu had GAC’s support to return to office.

The GAC, the highest decision-making organ of the party headed by Tinubu, had mid-April endorsed Sanwo-Olu for second term.
GAC had in 2018 kicked against the second term bid of a former governor, Akinwunmi Ambode, which led to the emergence of Sanwo-Olu as the APC candidate in the 2019 governorship election in the state.

Ambode’s predecessors were in office for two consecutive terms.
They include Tinubu, who was governor between 1999 and 2007; as well as current Minister of Works and Housing, Babatunde Fashola, who was governor from 2007 to 2015.

Responding to viral reports that Tinubu had rejected Sanwo-Olu just as he opposed Ambode in the build-up to the 2019 governorship election, Olusi told our correspondent in a telephone interview on Thursday that Tinubu had filled Sanwo-Olu’s endorsement form which would be transmitted to the party’s secretariat in the state before the May 23 governorship primary.

Olusi said, “All members of GAC are happy with Sanwo-Olu’s first term performance and we support his return for second term.
“A lot of our members have also filled a form endorsing Sanwo-Olu’s second term bid. Tinubu also signed the form. Any other thing is untrue.”

Another GAC member, the Speaker of the Lagos State House of Assembly, Mudashiru Obasa, did not respond to inquiries when journalists talk to him.

When contacted, Kayode Odunaro, an aide to another GAC member and Senator representing Lagos West, Solomon Adeola, said his principal won’t go against GAC’s decision.
“Whatever GAC has decided is what they have decided and I don’t think my principal will go against it,” he said.

On his part, the state chairman of APC, Ojelabi, said though the party did not have a consensus candidate yet, no other aspirant aside from Sanwo-Olu had picked up APC governorship form for Lagos.

Ojelabi said, “We don’t have a candidate yet. I only know that Governor Sanwo-Olu has obtained his nomination form. I have not seen any other person that has obtained form from Lagos State.

“The GAC made a statement that they have endorsed Sanwo-Olu for second term and they have not changed that. Asiwaju is part of the GAC.”

Efforts to speak with Sanwo-Olu’s Chief Press Secretary, Gbeyega Akosile, proved abortive as calls to his line and a text message were unreturned as of press time.

But Lagos State Commissioner for Information, Gbenga Omotoso, told our correspondent that the reports making the rounds were so because of what happened to Ambode in 2019.
Omotoso said, “Asiwaju is a member of the GAC and GAC, about two weeks ago, endorsed Mr Governor.

What is going around is mischief.
“People are talking about this because of what happened during Mr Ambode’s tenure but that should not make them give Asiwaju the name that he doesn’t bear; I think it is not fair to the man. The GAC has spoken.”
A source close to Sanwo-Olu accused Ambode’s camp of peddling falsehood.

The source said, “Tinubu has no problem with Sanwo-Olu. They were still together in Abuja days ago when their nomination and expression of interest forms were presented to them individually. It is Ambode’s people that are peddling falsehood.”

Responding, the Chairman of the Akinwunmi Ambode Campaign Organisation, Wale Oluwo, in a telephone chat with our correspondent, refuted the allegation.

He said, “The same way they heard about it was the same way we heard about it. The person that they said has been picked to replace Governor Sanwo-Olu is not from AMCO. He doesn’t work with us; we know him because he was in government and had been a PS (Permanent Secretary).”

When asked whether Ambode had purchased APC N50m form for the May 23, 2022 governorship primary, Oluwo said, “No”.
On whether the ex-governor had any intention to do so, he said, “The organisation, AMCO, will announce it. The organisation has to meet and finalise things and announce.”