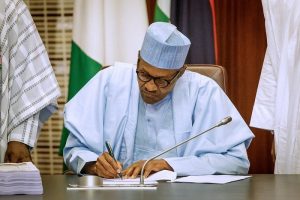 Goni was first appointed in 2017

President Muhammadu Buhari has renewed the appointment of Dr Ibrahim Goni, Conservator-General of the National Park Service for another term of five years.

According to Saghir el Mohammed, Director, Press at the Ministry of Environment, the re-appointment has since taken effect from May 10.

Goni’s initial appointment as the Conservator-General of the National Park Service was in April 2017 and is said to have facilitated the establishment of 10 additional national parks across the country as well as the renovation and building of rangers’ barracks, chalets amongst others.

The statement read in part, “Mohammed Abdullahi, Minister of Industry, congratulated Goni on his re-appointment and wished him more fruitful tenure of office. Your appointment is in accordance with the provisions of Section 171 (2d) of the 1999 Constitution of the Federal Republic of Nigeria (as amended).”

The minister also expressed belief that Goni’s return will give accelerated efforts for the immediate take-off of the new Parks and a change in NPS management mantra, connecting it to the various conservation value chains,

Report indicated earlier that the Senate passed for consideration, a bill for an Act to Establish the National Industrial Technology Park as a mechanism for clustering of knowledge & innovation-based industrial parks formation in Nigeria; and for related matters, 2022.

The bill which was read for the second time during plenary on Tuesday, April 5 is sponsored by Senator Ibikunle Amosun.

The bill is geared toward economic development, youth empowerment and capacity building.

IWD 2021 & PROTEIN DEFICIENCY: WOMEN TO SAVE THE WORLD