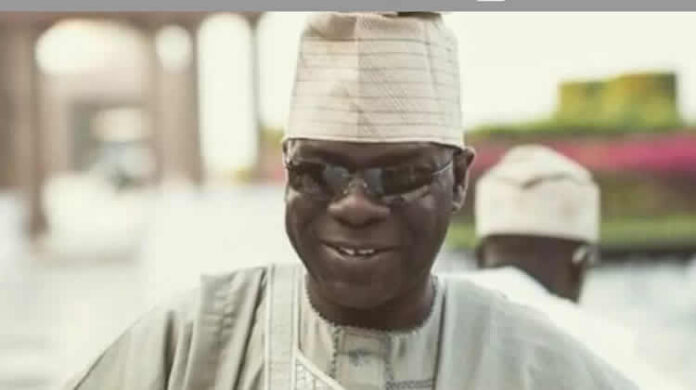 The Caretaker Chairman of the All Progressives Congress in Lagos State, Mr Tunde Balogun, has disclosed that the founding fathers of the party had an agreement in 2014 that the South-West geopolitical zone will produce the party’s presidential candidate for the 2023 election.

He said it would be “dishonourable” for the party to jettison the agreement now, adding that the President, Major General Muhammadu Buhari (retd.), the National Leader of the APC, Asiwaju Bola Tinubu, and many other persons made the “gentleman’s agreement”.

There have been insinuations among some party members and chieftains that the resolutions of the National Executive Committee meeting, presided over by Buhari on Tuesday, was a ploy by some party chieftains to hijack the control of the party for personal interest, including scheming towards 2023.

The NEC approved the extension of the six-month tenure of the Mai Mala Buni-led Caretaker/Extraordinary National Convention Planning Committee for another six months.

It also approved the immediate dissolution of the party organs at the polling units, wards, local government, states and zonal levels as well as the non National Working Committee component of the National Executive Committee.

It thereafter approved their immediate reconstitution and composition of the dissolved excos to serve in their respective offices in a caretaker committee capacity, excluding the non-NWC members of NEC.

But speaking with journalist on Saturday, Balogun said, “In 2014, the founding fathers of APC had a gentleman’s agreement and they committed themselves to the agreement. The party was victorious because they honoured the agreement they made and everyone worked together for the party in 2015 and 2019.

“According to the 2014 agreement, the South-West should be the zone to produce the presidential candidate in 2023. Among them (those present) were President Buhari and Asiwaju Tinubu.

“What I want is for this agreement to be honoured by the founding fathers. I have no doubt in my mind that they are men of honour. An agreement was reached and that agreement produced Buhari as the President in 2015 and 2019, so to jettison the agreement now will be dishonourable.

“Like I said, they are men of honour and I hope they will honour the agreement. They know what I’m talking about. Anything different from following the agreement is like shifting the goalpost.”

When asked the other parties to the agreement, Balogun declined. Asked if he also believed that the NEC resolutions were aimed at thwarting the 2014 agreement, he maintained that doing anything contrary to the agreement “is like shifting the goal post”.

Some party members have also argued that part of motives of the resolutions was to frustrate the rumoured presidential ambition of Tinubu, Balogun maintained, “That agreement should be honoured, anything contrary is like shifting the goal post.

“There are a lot of people who have personal agenda, pushing through all these caretaker idea and the dissolution of structures looks unconstitutional to me. Caretaker is alien to APC constitution but that is what obtains now. However, as a loyal member of the party, I don’t want to go against the party.

“People, because of their personal agenda and aspirations, are trying to destroy our party and make it unstable. That should not happen. Our party’s interest should not be sacrificed on the altar of personal aspiration or ambition of any individual.

“There is nothing wrong with leaders like Asiwaju (being supported). He’s one of the greatest leaders we have in Africa; he has charisma, character and he’s a man of his people. If he wants to aspire, it’s his constitutional right to aspire to any position in the land.”

Balogun’s revelation came as a fresh twist to the raging debate over where the ruling party would zone the presidential ticket to ahead of the 2023 election.

Former Lagos State Governor and Minister of Works and Housing, Mr Babatunde Fashola (SAN), had also told journalists on November 24 that the APC had a gentleman’s agreement that should be honoured.

Even though the party’s deputy spokesperson, Yekini Nabena, had previously told journalist that the party was currently not concerned about the zoning of the presidency in 2023, some party chieftains, including a foundation member of the party from Bauchi State, Abdullahi Dauda and APC Chairman in Zamfara State, Alhaji Lawal Liman, noted that there was a zoning agreement in principle.

Meanwhile, some top APC members believed to be loyal to Tinubu, have also faulted some of the resolutions of the NEC, saying it was a ploy to frustrate Tinubu’s perceived presidential ambition. Even though Tinubu has yet to declare his intention to run, insinuations are rife that he might contest the party’s ticket for the election.

Spokesperson for aggrieved members of the APC, under the aegis of Concerned APC members, Abdullahi Dauda, described the dissolution of elected party executives as illegal, noting that it was a ploy to influence the party’s candidates in 2023 general elections.

He said, “This illegal dissolution of elected executives at all levels points to one thing and one thing alone, which is to give state governors who want to be the only power bloc in the party, a free reign.

“They want to control everything and decide who becomes what in 2023, nothing else. This party was founded on a principle of justice and fairness; the APC and the north alone will not have succeeded in producing President Muhammadu Buhari without the support of the South West, especially party leaders like Tinubu.

“If anybody said this was not targeted at Tinubu, why did the NEC hold without the usual caucus meeting? Those who planned this whole thing knew that if a caucus meeting was held with people like Chief Bisi Akande and Tinubu himself attending, some of the decisions they took would not have been taken.

Also, Senator Abdul-Aziz Nyako from Adamawa State described the action as a “bit too hasty”, as he asked Tinubu not to lose hope.

He said, “Perhaps, they did it a bit too early. It is very important for the APC to retain a pool of its veteran and grass root politicians. It is important that some important members of the party be retained to be in charge of the party organ.

“Asiwaju is not a small person in Nigerian politics. As someone whose intention is to run for the presidency is not hidden, he should not sulk over the dissolution of party structure. All hope is not lost for him but he has to design another strategy. He should keep his eyes on the congresses and launch deeper into the states.”

The National Coordinator of Tinubu 2023 Non-Negotiable, Mutiu Kunle Okunola, said it was understandable that some people felt uncomfortable with the recent developments in the party. He however said the group was more focused on mobilising for grass roots support.

In Osun State, a chieftain of the party, Mr Kolapo Alimi, said those opposed to Tinubu’s ambition had yet to present an alternative. He stated, “Whoever wants to provide alternative to Asiwaju, let them provide it. Up till this moment, we have not seen any other person. I ask those oppose to him, if you don’t want Asiwaju, who is the person you are clamouring for

Meanwhile, one of the ministers opposed to the presidential ambition of Tinubu, who spoke with one of our correspondents, said the sacking of Oshiomhole as the national chairman of the APC remained the greatest achievement of those opposed to the desire of the former Lagos State governor to get the party’s 2023 presidential ticket.

He said neither the former governor nor the sacked party national chairman was aware of the impending removal of the former members of the National Working Committee then.

“In politics, you don’t sleep. You align with people of like minds. You team up to deceive others and bring them together to achieve a pre-determined agenda. That was what we used.

“We were at his (Tinubu’s) mercy when we were looking for power in 2014. He was giving us some unreasonable conditions. But we tarried. We were patient. We knew what we wanted. We were quiet and calm because we never wanted the Peoples Democratic Party to win the Presidency again. But now, the music has changed,” the minister added.

The minister, however, said the next fight would be to also scheme the former governor of Lagos State and his allies out of the group that would produce the next national chairman of the party.

FULL TEXT OF BUHARI’S SPEECH AFTER SIGNING 2022 BUDGET INTO LAW,...

States Where Atiku and Buhari will have Strong battle and why