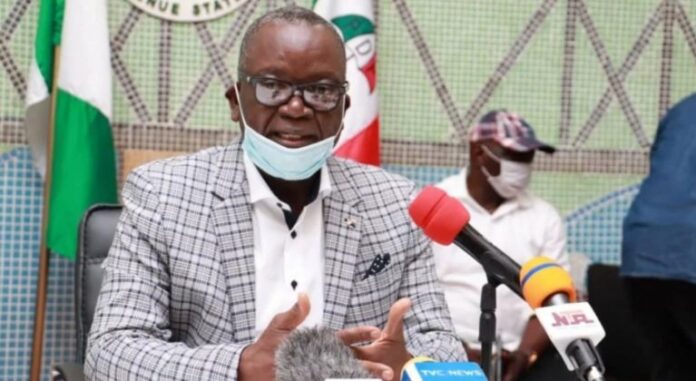 Benue State Governor, Samuel Ortom, has accused President Muhammadu Buhari of working for the Fulani tribe to take over Nigeria.

He made the allegation on Tuesday in reaction to the recent killing of residents allegedly by herdsmen in parts of the state.

“What is happening now, to me, is very clear; Mr President is just working for these Fulanis to take over the whole country.

“His body language is what is being played out,” the governor alleged while condemning the activities of herdsmen in the state.

He added, “The body language, the action and inaction of Mr President shows that he is only the President of Fulani people; I have known this.

“We are becoming a banana republic, if we have a president who gave the security agencies order to shoot at sight, whosoever is having AK-47 and the Minister of Defence came out to say that they cannot shoot at sight… so who is the Commander in Chief of the Armed Forces?”

Governor Ortom insisted that the activities of herdsmen in the country must be condemned while the people should come together to hold the President to account.

He decried that no fewer than 70 people have been killed in the last two weeks in three local governments of the state.

This, he noted, was in addition to the recent attacks that left six people dead, while one of the several injured victims later died in the hospital.

According to the governor, the people of Benue are being overstretched and running out of patience due to the incessant attacks on their communities.

“Mr President must rise up, he is the President of the Federal Republic of Nigeria and over the 250 nationalities that are in this country; Mr President is their President, we all voted him.

“He has taken oath of office to secure the country and provide security for lives and property; this is unacceptable, this cannot continue,” the visibly worried governor said.

He added, “Mr President must rise up to address the nation himself, not Garba Shehu or any of his assistants. Mr President must tell us where we are going in this country, this is too much.”

The governor stated Buhari has taken oath of office to secure the country and provide security for lives and property, saying the gross insecurity in the land was unacceptable and could not continue.