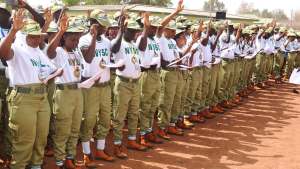 Ekiti state police command on Saturday confirmed the mayhem unleashed on hapless voters and security agents by political thugs at Omuo-Ekiti, during the House of Assembly by-election in Ekiti East Constituency 1 conducted by the Independent National Electoral Commission (INEC).

The sad situation led to the killing of three persons, including a policewoman.

According to a statement made available to newsmen by the PPRO in Ado-Ekiti on Saturday; “Today, some hoodlums attacked ward 7 unit 7 during the House of Assembly bye-election.

In the process, six people were injured, among them were two policemen and one National Youths Service Corps (NYSC) member who are currently receiving treatment in Ikole General Hospital”.

Abutu said the State Governor, Dr Kayode Fayemi, has, however, given a directive that all the suspects involved must be apprehended and brought to book.

However, eyewitness confirmed that aside from the policewoman who was gunned down, others who were mowed down by the dare-devil thugs were a 50-year old Bola Adebisi and 35-year old Tunde Ogunleye.

It was gathered that the situation created bedlam in the community as people were running helter-skelter to avoid being shot by the rampaging thugs.

Two police officers, an officer of the Federal Road Safety Commission, a Corps member and presiding officer, as well as one other, were also shot during the crisis and are now in critical conditions in the hospital.

The position became vacant following the death of an All Progressives Congress lawmaker in the State House of Assembly, Hon Juwa Adegbuyi.

The election had just started barely two hours when the violence erupted, which forced voters, INEC officials and security agents to stop the election abruptly as they had to scamper to safety to prevent being caught in the web of violence.

The Senator representing Ekiti South Senatorial District, Mrs Biodun Olujimi, said she narrowly escaped being shot as political thugs invaded her polling unit at ward 7 unit 007 and the federal lawmaker had to be ferried out of the polling unit by party supporters.

Besides shootings and killings, there were also reported cases of ballot snatching in ward Ward 9 unit 008 in the constituency.

Relating her experience to newsmen, Mrs Biodun Olujimi, said the election started peacefully in her unit before some APC thugs and compromised police officers started disrupting the voting process.

“The leaders of APC came to the polling unit, in fact, we greeted warmly. After they left, some APC thugs who stayed behind pulled out guns and started shooting sporadically. This is the first time we would witness this. They picked the ballot box and ran away.

“A man died as he was trying to escape the scene. The policewoman guarding the ballot box was also shot in the head. The corps member and presiding officer at the unit were hit by bullets.

“In totality, eight people were shot. Some dead and five are battling with their lives in the hospital receiving treatments”, she lamented.

Olujimi accused the leaders of APC of being the masterminds of the horrendous attack, saying they mobilised people from all over the state for election taking place in just five wards.

A member of the House of Representatives and a native of the town, Hon. Femi Bamisile, described the shooting as appalling and unbelievable, saying no election worth the blood of any Nigerian.

“In any election where people are being lost, that is no longer democracy. APC was fully prepared for this election and canvassed for votes and we never wanted to kill anybody. I really don’t understand how it happened.

“I didn’t want to believe that it was our party. The election started peacefully what could have erupted shootings and killings?”, he asked.

Regretting the extreme show of brutal force by political thugs, the PDP candidate in the election, Mr Akinrinade Adeniran, said signal of war started manifesting on Friday night when his house and cars were allegedly riddled with bullets.

“They invaded my compound on Friday and smashed my car’s windscreens with gunshots. They also shot at the roof of my building.

“This is no longer democracy. Democracy is the government of the people and the people should be allowed to make their choices through their votes”.

LET’S BE DRIVEN BY LOVE, PEACE THIS NEW YEAR – SHINA...