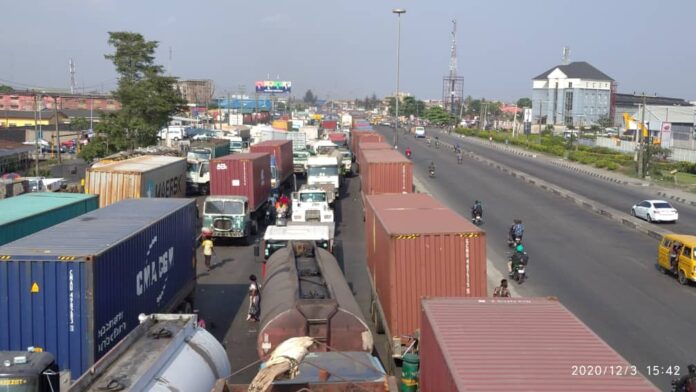 Barely 72 hours into the commencement of the new Call-Up System into the administration of port operations introduced by the Nigerian Ports Authority, NPA, Lagos State Special Traffic Management Enforcement Team has expressed determination to sustain the new order in Apapa and environs as gridlock eases off.

This happened as decorum and sanity seemed to be returning gradually to Apapa access roads and environs following enforcement and commencement of the new Call-Up System.

Several efforts in the past to tackle the intractable perennial gridlock had failed to force business owners to relocate to neighbouring countries as well as some residents abandoning their residences and other properties to safe abodes.

Recall that Lagos State Government and NPA, last Tuesday, disclosed plans to finally commence a three month trial on enforcement and compliance of electronic-Call-Up System from February 27, 2021, as part of measures to ensure the free flow of traffic in Apapa access port areas and environs.

Sanwo-Olu had recently, constituted the Lagos State Special Traffic Management Enforcement Team, saddled with the responsibility of resolving the incessant gridlock that has plagued Apapa and its environs, resulting in untold hardship and huge losses in both National and state internal revenues.

Speaking on Monday, during inspection and monitoring of compliance level to the new order, Fayinka, in the company of Commissioner for Information and Strategy, Mr Gbenga Omotoso, expressed partial satisfaction, saying, “There is still room for improvement.”

He stressed that all hands must be on deck to ensure total sanity and sustenance of the present traffic situation in Apapa.

“Governor Babajide Sanwo-Olu has directed us to come and access the situation after the commencement of the Call-up system. Though there is a lot of improvement there are still some grey areas to be cleaned up for improvement.

We will not relent in sustaining this current order in Apapa. The Governor is determined to see an end to Apapa gridlock.”

Fayinka had earlier stated that petitions from residents of Apapa, Ijora, Tincan, Sifax and Mile-2 axes received by the Ministry of Transportation, had been forwarded to his team for action against truckers’ unruly behaviour on the road which has prevented other road users from accessing their desired destinations with ease, appealing further to stakeholders to cooperate with the state government in removing the congestion and remedy the situation.

He declared that non-compliance on the part of trailer and truck operators would meet the full weight of the law, and therefore, urged stakeholders and those concerned to conform with directive already issued in their own interest as enforcement will be total.

Odumosu, while addressing police personnel deployed for enforcement at “Area B” Command Apapa, warned against corrupt practices and adherence to rules of engagement, saying that anyone caught in an act of indiscipline would be severely punished.

Report revealed some level of normalcy in Apapa as most of the trucks and articulated vehicles which normally lined up on the road indiscriminately have disappeared allowing the free flow of traffic with only a few still dotting the road.

Some of the areas visited include Funsho Williams Western, Ijora-Apapa Area B inward Apapa Nigerian Ports Authority, NPA, Tincan port, among others.

While addressing the team, a member of the Association of Maritime Truck Owners, AMATO, Alhaji Isiaka Mamud, pleaded on the team to ensure strict compliance with the system, saying several efforts in the past had led to complete failure.

“We want the government to ensure that this new order is maintained and improved on. It will be our joy to see it sustained because several solutions proffered in the past had failed,” Mamud urged the government.

Reacting to the development, a resident at Amuwo-Odofin, Jakande Housing Estate, Mile-2, Mr Yinka Adewale; “This is long overdue.

There is a bit of sanity here since yesterday, Saturday. This is how Oshodi-Apapa Expressway used to look like many years ago.

“I believe this can be sustained if stakeholders have the will to make it work. This new order must be sustained in the interest of the general public.

This will also eliminate the criminal activities in the area as well as help to stop the economy from bleeding.”

Also, a motorist, Mr Francis Agu, “I can’t believe I can drive through Oshodi-Apapa Expressway to Berger Yard without any hassles.

Before now, I used to drive from the second Rainbow through Fatgbems Filling Station to Berger yard for about three hours but today, (Sunday) is less than five minutes.

I want to call on the authority to sustain this momentum. So, where are the trucks, where have they disappeared into?

If that happens, then we will get a good result. Actually, if it takes off successfully, it will eradicate corruption, no human contact and another artificial bottleneck. NARTO wishes the authority a successful take-off.

“The motive is to take trucks off the roads, but NPA should involve other garages where trucks are parked in order to successfully decongest the roads.”

With the commencement of the automated system, any truck found on the access road that has not been called upon through e-call up will be impounded by Lagos State Government, supported by federal Road Safety Commission, FRSC, and NPA security and violator(s) will have to pay a huge sum of fine before the truck will be released.

This preceded consultation over the last two months with truck owners and media engagement where the procedure for utilizing the call-up system was discussed.

Any truck that is found in the corridor would be impounded and the Lagos state government will provide the platform for which the payment will be made to enable the owner to collect the truck back.

No individual should try to get empty containers into the ports as they will not be allowed to do that anymore.

The operation entails that when the box is emptied, it will be returned to the empty container holding bays of shipping companies and if any holding bay is filled up, a helpline has been created by NPA to attend to such complaints.

The NPA collaboration with the Lagos State government is expected to end traffic gridlock in the area.