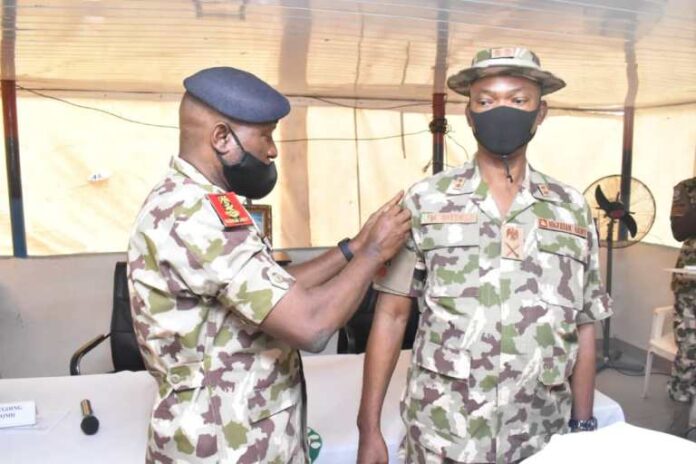 The Operation SAFE HAVEN now has a new Commander. He is Major General Dominic Onyemulu who until his latest appointment was a Director at the Armed Forces Simulation Centre Jaji. He took over from his predecessor, Major General Chukwuemeka Okonkwo who has been posted to the Nigerian Army Welfare Limited by Guarantee as the Managing Director.

Speaking during the Handing and Taking Over Ceremony held at the Headquarters Operation SAFE HAVEN on Thursday 11 March 2021, the outgoing Commander, Major General Okonkwo lauded the personnel of Operation SAFE HAVEN for their cooperation, steadfastness and dedication throughout his tour of duty as the Commander.

He charged them to continually demonstrate high level of professionalism in the discharge of their duties as stakeholders in peace building.

He also urged the troops to extend the same cooperation to his successor. In his remarks, the Incoming Commander, Major General Onyemulu said he would build on the existing synergy between OPSH and other security agencies across the Joint Operational Areas with a view to achieve the operational mandate.

He urged the personnel and relevant stakeholders in the corridor of peace to unite against crimes across the Joint Operational Area, stressing the need to continually preach peace for the advancement of the society.

The Incoming Commander also reiterated the commitment of the command in delivering its mandate of maintaining peace through organizing social intervention programmes for host communities and use of non-kinectic approaches in dispute resolution.

CATCH ALL THE AMAZING HIGHLIGHTS FROM FIDELITY BANK’S THE EUPHORIA EVENT...

BREAKING: PHOTOS AS THOUSANDS OF YOUTH MOBILISE FOR TINUBU, OBASA

TIV YOUTH ORGANIZATION CALLS FOR PROSECUTION OF OKEY IFEJOKU, OTHERS OVER...