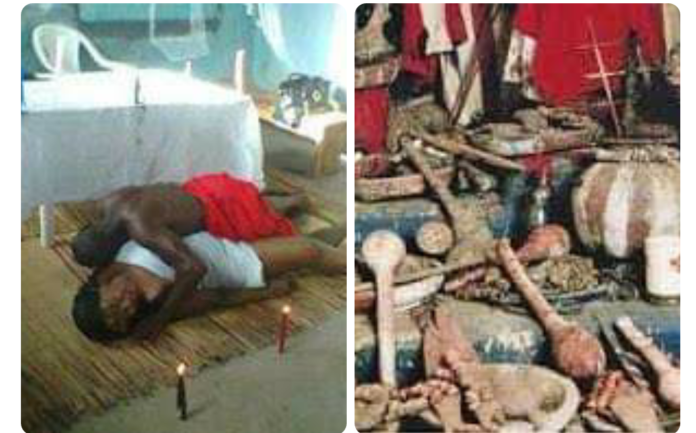 The Cherubim and Seraphim Church (C&S) has sealed four branches in Ondo after the presiding pastors were caught engaging in fetish activities.

President of Ondo State unification of leaders of C&S Primate Ade Ademisokun-Turton, who disclosed this at a briefing on Wednesday, said the churches were sealed to bar the pastors from tarnishing the image of the church.

Ademisokun-Turton said any pastor that required training would be allowed to come in.

He said leaders of the C&S have settled their differences and are united as a body.

Ademisokun-Turton, who spoke on his installation as baba alakoso of unification of leaders of C&S, said his deputy, seven council of elders and three baba aladuras would also be installed.

“We may not be one in the past before, but now we are one body there were some people that want to join us and that is why we want to train them. Not too long ago, we sealed some churches and they still remained sealed because they don’t know anything about C&S, we are not going to take that anymore,” he said.

“Those who have accepted to be trained would be allowed to come in. We have sealed about 4 churches now caught doing fetish because we have zero tolerance for fetish in C&S.

“The Cherubim and Seraphim Church would no longer tolerate fetish activities in any of its branches henceforth.

“We believe we are the first Pentecostal church in the whole of Africa and the spirit of the Lord is still with us so the missing areas that have not been properly addressed by our leaders have now been readdressed. We now represent the new testament because those things that were taken for granted have been taken serious now.

“We are making efforts to formally have a training school for our officials, it is not enough to have a calling but someone must be trained. We realise that where things are missing needs proper training to make a church grow.”

”The churches sealed did not have the qualifications or know anything about Cherubim and Seraphim Church.

According to him “the proliferation of churches has caused a lot of damages to the Christian body as many of them want to outshine one another using fetish means.

He also said that “an annual convention was being planned to unify Cherubim and Seraphim and to let people see what had not been showcased about the church in the past.

However, he said a seminary would be established by the church to train those who are interested in establishing Cherubim and Seraphim Church.

“We are making effort to formally have training schools for our officials. They must be trained as Jesus did to the disciples. To make the church grow.

“We are concerned about our image and we are working on that. No all Cherubim and Seraphim churches are absolutely the same. Callings are different. Some of us are doing some things that unwholesome.

“People start church Cherubim and Seraphim but we realised the importance of control, we are not trying to control the holy spirit. Those who are never members could start a church in the past. But that has stopped.

He added that “We will only allow those who know the rudiments. Offices, titles have been streamlined. No one can be called Baba Aladura without approval.

BITT INC, THE COMPANY DEVELOPING ENAIRA IS NOT MY COMPANY –...

HOW FMBN IS ACCELERATING DELIVERY OF AFFORDABLE HOUSING TO NIGERIANS