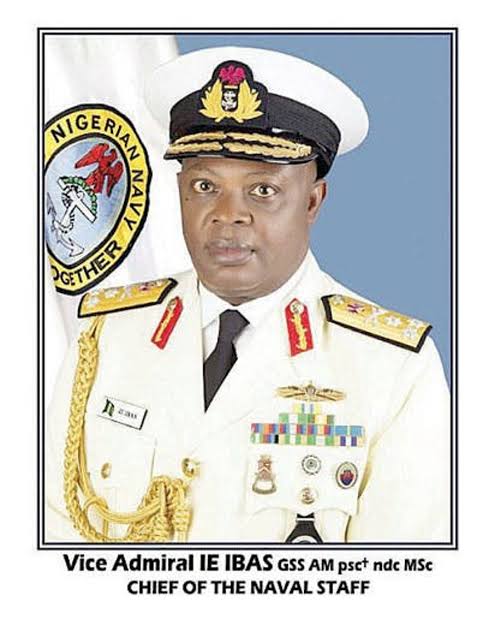 Chief of the Naval Staff (CNS), Vice Admiral Ibok-Ete Ibas has assured that the Nigerian Navy would continue to support the Ministry of Defence (MOD) in the discharge of its onerous responsibilities.

He stated this during the maiden visit of the Permanent Secretary of the Ministry, Mr. Babangida Hussaini to the Naval Headquarters.

The CNS submitted that being the supervisory ministry for the defence services, the MOD has overtime played a key role in the strategic direction and resource enablement of the NN, which has enabled the Service to optimally meet her statutory goals and responsibilities.

Vice Admiral Ibas noted that the Permanent Secretary’s visit was vital considering the fact that his office being the fulcrum for the administrative and accounting processes at MOD, is crucial to the attainment of NN operational objectives.

According to the CNS, the visit would afford the Permanent Secretary the opportunity to understand the peculiar dual role of the NN as a critical stakeholder in both the maritime territorial defence of the nation and as an invaluable guardian of the nation’s strategic resources, most of which are located at sea.

Speaking earlier, the Permanent Secretary stated that the purpose of the visit was to familiarize himself with the agencies under the ministry in order to foster a better working relationship anchored around understanding the respective mandates as well as the constitutional duties of the different agencies.

On his part, Mr Hussaini also observed that there was a need for key stakeholders in the defence sector to better synergize and work together in a harmonious manner to overcome the insecurity issues in the country.

He revealed also that upon his assumption of office, he discovered that a lot needed to be done in order to fill in the gaps that existed both vertically and horizontally and that measures have been introduced to overcome these challenges. While some of the problems are within the ministry, others are outside the ministry and we are working as a team to address the problems, the Permanent Secretary added. He promised that going forward with measures put in place, results will begin to show especially in the area of procurement, general administration and management of the Services.