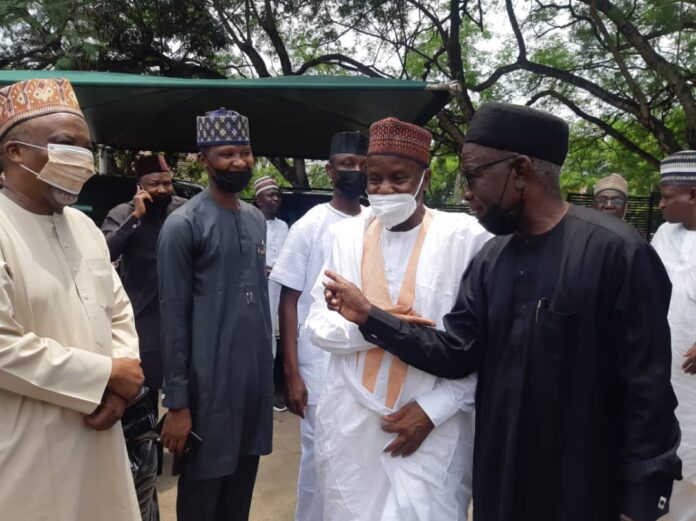 The Minister of Defence Maj Gen Bashir Salihi Magashi (retd) has paid a condolence visit to the wife of the late Chief of Army Staff, Mrs Fati Attahiru at the Flag House, Niger Barrack Abuja.

The Minister’s condolence visit to the family of the late General Attahiru in less than twenty four hours post burial of the deceased according to him was in swift response to mitigate what he called the excruciating psychological impact of the death of her husband whom he described as a heroe in the nation’s campaign to end insecurity.

In an obvious emotional laden mourning mood and tone the Minister while interacting with the bereaved assured them that the Federal Government will not forsake nor forget the family in the shared low moments and pains of the death of the Army boss who died gallantly serving the nation.

He therefore onbehalf of the President and Commander-in-Chief of Armed Forces consoled Mrs Fati Attahiru and the children of the late General that they should be strong in holding onto their faith believing that from Almighty Allah we came and to Him we shall all return at the destined times.

In the same vein the Minister also visited the family of the Late Brigadier General Olayinka where he was joined by the wife of the Vice president, Mrs Dolapo Osinbajo who was there on the same mission.

The minister prayed to God to repose the souls of all the departed officers and the crew who lost their lives in plane crash.
General Magashi was accompanied on the condolence visits by the Chiefs of the Defence, Naval and Air Force.

“STOP SAYING YOUR MAN WAS CHARMED TO LEAVE YOU, HE LEFT...

HOW MY ‘YAHOO’ SON TRIED TO USE ME FOR MONEY RITUAL...