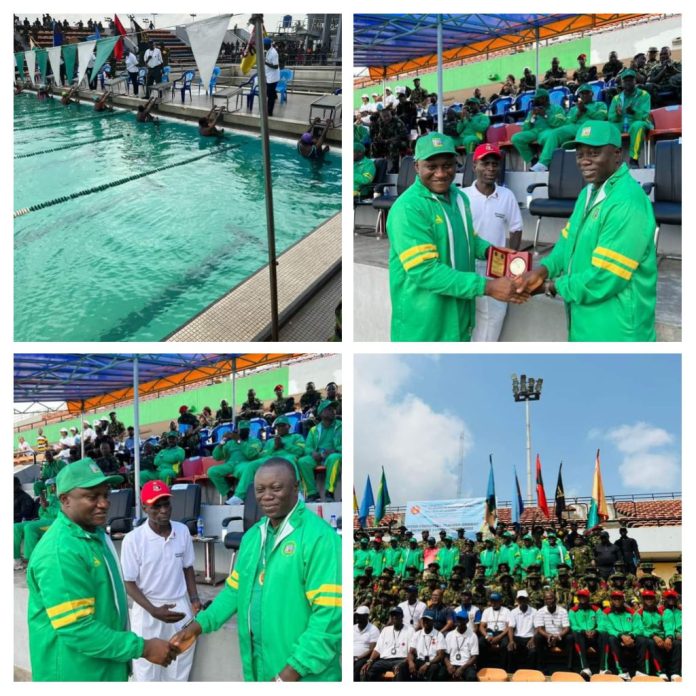 The 4-day-long competition which will close in Badagry on 1st December, 2022 is to improve combat proficiency, leadership skills, and team work as well as an avenue to identify training gaps and weaknesses. The first edition of the championship held in 1 DIV Kaduna last year. The competition fits into COAS Faruk Yahaya’s vision ‘to have a
Professional Army ready to accomplish assigned mission within a joint
environment in the defence of Nigeria’.

Declaring the championship open, the Special Guest of Honour and Commander, Corps of Nigerian Army Engineers, Maj. Gen. KO Kadiri who represented the Chief of Army Staff, Lt. Gen. Faruk Yahaya at the event noted that swimming is a sport that develops the whole physical and mental health of the body.

He added that swimming is encouraged for anybody who wishes to join the Army. ‘It is also important in the marine and riverine environments where we have soldiers operating’, he told NAOSNP.

In his opening remarks read on behalf of the COAS Faruk Yahaya, Maj. Gen. KO Kadiri affirmed: ‘The Inter-Formation Platoon Combat Swimming Championship is designed to improve the physical and mental abilities of the participants with a view to reinforcing the overall combat preparedness of our troops.

By the same token, it would enhance their fighting efficiency and performance in the field. This is with a view to preparing participating troops for a variety of tasks towards addressing contemporary security challenges.’

‘As you are all aware, the Nigerian Army, sister Services and indeed other security agencies are currently involved in multiple single service, joint and combined operations to combat terrorism, banditry, kidnapping for ransom, cultism, piracy and oll theft among others.

These operations call for highest standards of fitness and training to stay ahead of the criminals. In this regard, the Nigerian Army has placed high premium in qualitative training of its personnel across board.’

On the swimming activities, Maj. Gen. Kadiri said: ‘The conventional and combat swimming events that have been lined up in this Championship will therefore equip troops with skills to conduct operations optimally especially in riverine and amphibious terrains.

It is also in furtherance of the vision of the Chief of Army Staff which is to have ‘A Professional Nigerian Army Ready to Accomplish Assigned Missions within a Joint Environment in Defence of Nigeria. Having sald this, I will like to implore the participants to compete keenly in all events and showcase their skills.

Ultimately, this exercise will promote esprit-de-corps and strengthen the existing comradeship amongst you, additional to other benefits. Therefore, I urge you to conduct yourselves professionally throughout the competition.’

In his welcome address, the Host of the championship, the General Officer Commanding 81 DIV, Maj. Gen. Obinna C. Ajunwa said that the competition is an essential part ot military training. ‘Therefore, I will like to enjoin the participants to bring out the best in them. The objectives of this year’s Championship are to improve fitness for combat, engender junior leadership and promote use of initiative as well as esprit de corps among NA personnel. Additionally, it would strengthen the swimming skills of the
participants and also better prepare them for operations in amphibious and riverine environments.

Without mincing words, I believe new lessons will be learnt during this Championship. These lessons must be used by participants to sharpen their professional competency and skills.’

‘I want to call on all competitors to play by the rule of fair play. You are enjoined to shun any act of indiscipline while in Lagos State.

You are also to use this opportunity to build positive relationship and make good friends. The necessary logistics have been made avallable to ensure that the time you will spend with us here is worthwhile.

The competition will run for a period of 4 days beginning from today. I have the belief that our warm hospitality and the beautiful weather in Lagos will make your stay a memorable one.’

Medals and souvenirs were presented by Maj. Gen. KO Kadiri to winners of the women 100meters backstroke held today.