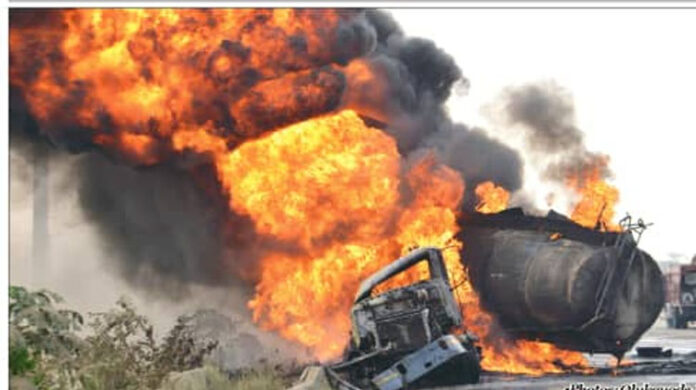 Scene of the tanker explosion.

Motorists and commuters on the Lagos-Ibadan Expressway were, on Wednesday, stranded after a tanker exploded at the Magboro end of the road.

It was gathered that the tanker, laden with 33,000 litres of Automotive Gas Oil, was travelling out of Lagos when it exploded around 4am.

Report indicated that the driver was trying to negotiate a bend around the Magboro Bridge when the tanker fell and exploded.

Hundreds of motorists spent hours in traffic, while some commuters resorted to trekking.

A motorist, identified simply as Chukwuemeka, who was travelling to the eastern part of the country, told our correspondent that he had spent over five hours on the road and was still around Arepo.

He said, “I left Lagos around 5am for Enugu, but I started experiencing the traffic from the OPIC area. I learnt that there was a tanker explosion; our government needs to act fast in situations like this so that activities will not just be grounded because of an explosion.

“I am going to Enugu and I am still at Arepo at this time so I should have covered a significant distance. I am already tired just by sitting down behind the wheel and moving slowly; the government needs to find something about the issue of tanker explosion happening every time.”

Another motorist, Segun Adesafe, said, “We have been on this road since morning and we don’t even know when we’re going to get to our destination.

The issue of tanker explosion needs to be addressed by our government; we cannot continue like this; they’re not providing for us and we’re trying to provide for ourselves, but tanker explosions are disturbing us now and then.”

A commuter, Gbenga Adewolu, said he alighted from the vehicle conveying him to Mowe on the Long Bridge and trekked to Ibafo before boarding another vehicle.

An eyewitness, who spoke on condition of anonymity, said, “When I woke around 4am, I saw fire raging on the expressway and I thought it was Boko Haram. I had to wake my family and neighbours up. We were watching the inferno from my house and saw that it was a tanker that exploded.”

Confirming the incident, the acting Coordinator of the Lagos Territorial Office of the National Emergency Management Agency, Ibrahim Farinloye, said the explosion was caused by the tanker falling on asphalt.

“In the course of the evacuation of the wreckage of the tanker, it fell off and landed on the asphalt, which led to a spark and with remnants of the AGO, the spark led to fire outbreak and spilling of the content into the adjoining drainage close to a gas plant.

The explosion was contained to the carcass of the tanker without any casualty and the gas plant was saved as well,” Farinloye explained.

The Public Relations Officer, Ogun State Traffic Compliance and Enforcement Corps, Babatunde Akinbiyi, said the driver approached the bend at top speed and this caused the tanker to fall.

“The accident was more of the gridlock and time wasted by people, who had already planned their journey. The driver approached the bend at high speed; there is a diversion in the area and as he was trying to pull out of the diversion to enter the main road, the tanker fell on its side and the driver ran away,” he stated.