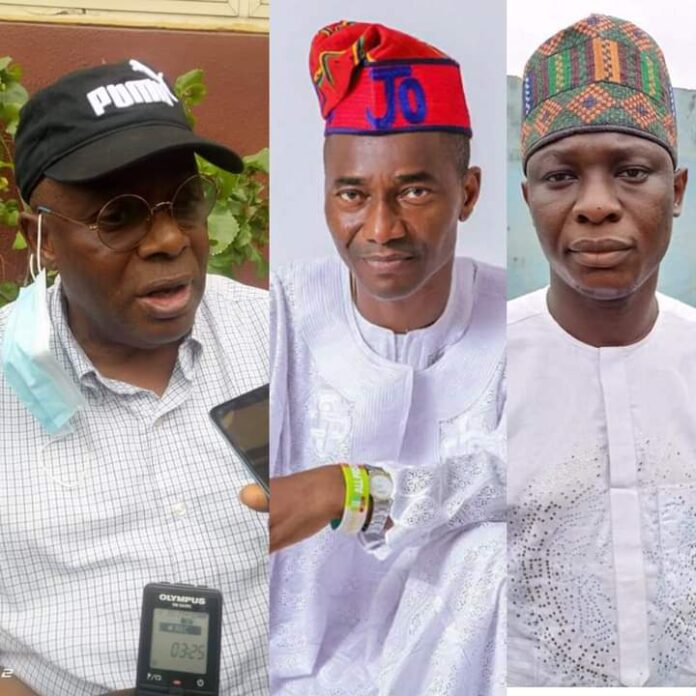 While the All Progressives Congress (APC) appears to have completed its primary elections across Lagos on Saturday, the fate of party faithful in Ojodu LCDA of Lagos is hanging in the balance. This is because no elections had been conducted for Ward F of the local council.

While the process was largely peaceful from the early morning, it almost suffered a violent disruption as thugs led by one Elewedu invaded the Ojodu Grammar School polling venue.

But for the timely intervention of the police in the area, some persons including Hon. James Faleke representing Ikeja Federal Constituency in the Federal House of Representatives may not have left the centre unhurt.

Trek Africa Newspaper present at the polling station observed that the party primaries didn’t start as when due because of the lateness of the returning officers. By the time they arrived past midday, an argument over the name of a councillorship candidate missing from their list led to another delay.

When the platitudes fell on deaf ears, the election officials left and advised all aggrieved parties to report to the state secretariat by Monday.

In separate chats with various persons, Oki Samson of Trek Africa Newspaper was able to gather information from different angles.

A member of the party, Omotola Adebayo noted that they have been at the centre since 7:30am. He went further to accuse Hon. James Faleke of political intimidation. ‘We have been waiting for the APC Electoral body and we saw them at exactly 15 minutes after 12.

We were excited and amazed because at least we were going to have an election. But I was surprised at what I saw. The first thing that annoyed me was Honourable Faleke, the so called representative who represents us in Ikeja here. He was trying to intimidate people.

He was on the line talking to the LASIEC people. I saw him; I have the evidence, I even have it on video. He called some Hausa men and started giving names that they are his candidate and they should vote for them. We left him alone because we want a free and fair election. Then something happened.’

‘We were on the line waiting for them to bring the ballot papers so we can start voting since they said they were going to use the Open-Secret Ballot system. But the papers they brought to us were the duplicated ones.

He came with police. We withstood them and told them this is our land. You cannot intimidate and disenfranchise us in our land. We want to vote. We are tired of Faleke, we are tired of Owosope. They should give us the freedom to exercise our rights. There has not been any incidence of fighting or violence and so there is no casualty here.’

On his part, Hon. James Abiodun Faleke refuted the allegations. ‘I got here at 12.30pm though I was monitoring from home until the electoral officers arrived. When I got here, the operation was smooth. They announced those who had been cleared by the party and those who had not been cleared.

Particularly, there was the issue of a councillor candidate who was not cleared by the party and he was making problems at the screening committee but he claimed he had been to the appeal committee and he was later cleared.’

‘All this are not good for the electoral process but I asked him if he has any evidence of that. He said yes and showed it to me on his phone and so I said to the other leaders, allow him to contest and test his popularity. I called the State Secretary and told him this is what is happening here.
All this was to allow for peace and let the process commence and it started.’

This move, perhaps, is what led to the perceived intimidation by some youths in the community. The Federal lawmaker continued, ‘There was a boy here, I think he is the son of the Baale of Ojodu, he became unruly.

I think he is a Chairmanship aspirant here. They became unruly and started attacking the Electoral Officers here. When all these began to happen, you know we have our security people here.

They must maintain peace. When they started attacking the Electoral Officers that a name that was not cleared must be returned to the list. So the electoral officers stopped and said as things are they have to go. So they stopped the process and left.’

‘We have been sitting here peacefully for about two to three hours. They went to hire a thug by name Ismaila Taiwo, alias Elewedu to come and attack us. Of course, we sat down quietly and we were waiting for him to come start his mission.

Unfortunately it is some of our leaders that did that. The guy himself said it in front of the people; he said it was Hon. Julius Olumuyiwa Oloro and Cardinal Odumakin,  who called him to come and disrupt whatever was going on here.’

On what he thinks would be the next line of action, Hon. Faleke stated: ‘we have told those who came here with their party cards to write down their names and indicate who they wanted to vote for. We have appealed the state; we have written a petition.’

According to the APC guidelines, the primaries were to start by 8am and we have been here since 7:30 but the electoral officials got here around 12 noon. The accreditation started around 1pm because when they came, the party agents presented themselves and we had to get them arranged.’

‘Then, they read out the list of councillorship aspirants. We were supposed to be three, but my name was omitted and I don’t know why because I was duly screened. When I found out that my name was not there, I went to the Electoral Officer and asked for a copy of the approved list from the state.

At the end of the day, he brought out a photocopy, my name was not there and I asked for the original and he could not produce it. They said it was the photocopy that was issued to them from the state.’

‘I and my agent went to the Local Government Office at 12 Ijaiye Road Ogba and met one Mr. Adeshina. He said the party monitoring team will be moving around from one election point to the other. He said I should go back to my ward centre and when they get there, I should lay my complaints. I have been back since then and I have not seen them.

‘As it is now, there was no election in ward F. They said it was cancelled. And this is the Ward of our Leader Honourable Abiodun James Faleke. He himself was present here. He saw what happened. The Ward Chairman, Alhaji Tajudeen is around, even Alhaji Adedepo is also around.

All these happened in their presence. My name cannot be in another place. As for another election, well, I cannot say because this was the only day set out by the party for the election. I think that is for the leaders to decide. I know they will come up with a solution.’

GET YOUR JAMB ePIN ON QUICKTELLER, GET REWARDED! ~ Fame News