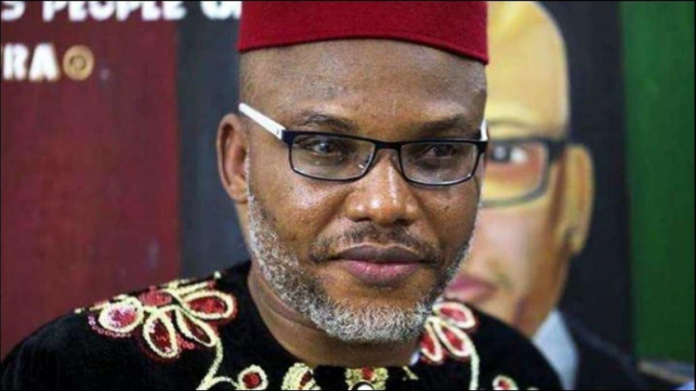 An Abuja Division of the Federal High Court has fixed February 28 to hear Nnamdi Kanu’s fundamental rights enforcement suit against the Department of State Security (DSS), the AGF and the Director-General of the DSS.

In a suit marked: FHC/ABJ/CS/1585/2021, Mr Kanu had filed the suit through his lawyer against the respondents seeking the enforcement of his fundamental rights as enshrined under the law.

He sought the court to direct respondents to abide by the provisions of Chapter 4 of the 1999 Constitution (as amended) and the African Charter on Human and Peoples Rights (Ratification and Enforcement) Act, while carrying out their lawful duties.

When the matter came up in court, counsel to DSS, Idowu Awo, told the court that his clients had a counter-affidavit yet to be served on Mr Kanu.

He prayed the court to grant him more time to effect the service of the application on Kanu’s lawyer.

In response, Kanu’s lawyer, Mr Maxwell Opara, objected to the DSS request. He said it was an attempt to subject Mr Kanu to solitary confinement and other inhuman treatments. He argued that the counter-affidavit by the DSS was filed out of time.

Simon Enoch, the lawyer to the Attorney-General of the Federation’s (AGF), also told the court that he had filed a motion for extension of time to regularise his counter-affidavit.

The presiding judge, Justice Taiwo Taiwo, noted that the matter was coming up before him for the first time, adjourned the matter until February 28 for a hearing.

Kanu’s lawyer is seeking an order of the court directing the respondents (DSS, DG DSS and AGF) to transfer Mr Kanu from alleged solitary confinement to the correctional facility in Kuje.

He also sought the court to order DSS to grant Kanu access to medical facilities and materials for the practice of his religion.

Mr Opara averred that Kanu, though a detainee, is entitled to enjoy his freedom of thought, conscience and religion as guaranteed by the law.

They also submitted that the continued detention of Mr Kanu at the DSS facility is subjecting him to mental torture.

They sought among others “a declaration that the applicant, even though a detainee, is entitled to the enjoyment of his right to dignity of human person as guaranteed under Sections 34(1)(a) of the 1999 Constitution (as amended).”

Recall report had reported that Kanu’s trial before Justice Binta Nyako was adjourned to February 16, after he had pleaded not guilty to the 15-count charge proffered against him by the Federal Government of Nigeria.

HOW TO LINK YOUR MTN, AIRTEL, GLO, 9MOBILE LINES TO NIN

LASTMA OFFICIAL HAS BEEN KNOCKDOWN AND KILL BY LAGOS MOTORIST

NIS BOSS IDRIS JERE CALLS FOR COMMITMENT TO REFORMS AS 2022...