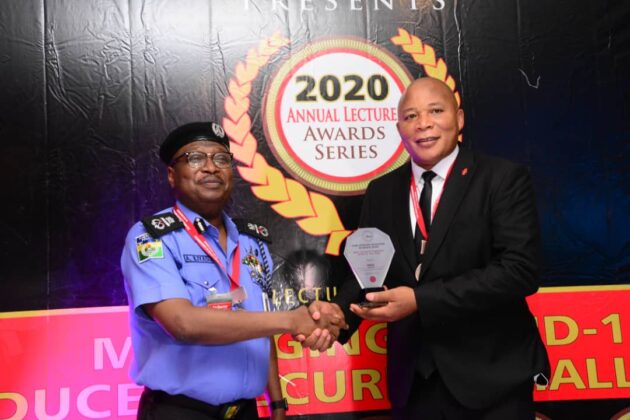 It was a gathering of stakeholders in the security/defence sector of Nigeria, including the police, army, Immigration service, customs, Department of State Service (DSS), Civil Defence Corps and private security agencies, as well as journalists, bank executives, drivers of telecoms sector and people from all walks of life, recently, at the Banquet Hall of Sheraton Hotel, Lagos, where they brainstormed on how to manage security challenges posed by the COVID-19 pandemic.

The gathering, under the auspices of the Crime Reporters Association of Nigeria (CRAN), was described by speakers as the first of its kind, as stakeholders converged to profer solutions to Nigeria’s security challenges.

During the ceremony, some security personnel businessmen and organisations who have performed exceptionally well in their various fields of endeavours were rewarded with the highly coveted CRAN Award.

Top on the list of honourees was Africa’s global financial institution, the United Bank for Africa (UBA) which bagged the Most Security Conscious Bank of the year.

According to research by CRAN standing committee on Due Diligence, UBA has been in the forefront of supporting the police and putting in place digital security measures in securing customers money as well as bank’s assets.

“UBA has over the years been recipient of awards and recognition for pioneering innovation in the African banking sector.

Some of its landmark achivements include: The first among international banks to be registered under Nigerian Law in 1961; the first Nigerian bank to offer an IPO, following its listing on Nigerian stock Exchange in 1971.

According to President CRAN, Mr. Odita Sunday, a report from UBA stated that the financial institution has done many great things” the bank has created a corporate culture foundated upon strong organisational values and performance-driven operating standards, while our multicultural and multilingual staff enjoy the distinct advantage of having a multilingual and multicultural operation, with a staff base fluent in the three major global languages: English, French and Portuguese.

Therefore, our customers are never at a loss with their transactions in the bank, no matter the language they decide to deal in. Essentially, we serve a diverse range of customers across different nationalities, culture and languages, cutting across all strata of business and persons”.

Presenting the award to the representative of the GMD United Bank for Africa, Mr Kennedy Uzoka, Assistant Inspector-General of Police (AIG) incharge of Zone 2 Command, Mr Ahmed Iliyasu, said the bank merited the honour and advised other financial institutions to emulate the virtue of UBA.

AIG Iliyasu, pointed out that for Journalists to pice UBA for the honour, there must be something good about the bank.

He said that security is everybody’s business and congratulated UBA and CRAN for being security conscious.

The representative of Mr Uzoka, Ramon Nasir, who is the Head Corporate Communications of UBA, said the bank would continue to do its’ best to keep the flag flying: “On behalf of GMD and the management of UBA I want appreciate CRAN for the honour given to us.

“We will continue to synergize with CRAN. We will continue to do our best, because to whom much is given, much is expected of him. The award will spur us to do more by putting more hands on deck in ensuring that we do not fail the general public and Africa as a whole in the area of security and management of their finances, assets and public relations too. You have challenged us with this award and I can assure you that we will not let you and our numerous customers down Mr. Nasir added.

Odita, while commending the award winning Bank “UBA” also used the medium to express his gratitude to the bank for its support to CRAN each time it needed assistance.

BREAKING: ALAAFIN OF OYO DIES AT 83