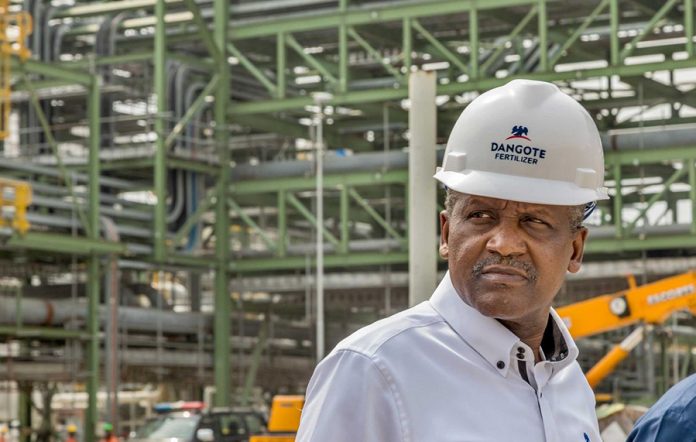 The Management of Dangote Refinery has  denied news of talks between Aliko Dangote, Africa’s richest man, and Trafigura and Vitol, the world’s top two oil traders.

This is subsequent to information that Dangote is in talks with some of the world’s biggest oil traders to help finance his mega refinery project in Nigeria’s commercial centre Lagos, sources with knowledge of the matter said, although the company has now denied holding these discussions.

The refinery with a 650,000 barrel-per-day capacity has been projected to be the continent’s largest plant upon completion, which will redraw major trade flows of crude and fuel in the Atlantic basin.

Nigeria, the home country of Dangote Refinery, is Africa’s biggest oil producer and exporter and is largely fuel-imports dependent, despite that it has refineries in different parts of the country that have been left to waste away over decades.

Recently, Nigeria’s state oil firm, NNPC agreed to buy a 20% stake in the refinery for about $2.8 billion, however, information in the public domain suggests that Africa’s richest man is still in search of external funding.

The management of Dangote Industries Ltd has refuted this claim stating that “The company is not in any talks with the aforementioned oil traders to seek a loan to finance our project.”

Meanwhile, the two major oil traders in the world, Trafigura and Vitol, have declined to comment.

According to Reuters, two separate sources with direct knowledge of the matter said the option of raising another $500 million from a trade house or consortium was being explored, and although details of a potential loan from a trading firm have not been finalised, the trader could receive a long-term contract to supply crude and receive cargoes of refined products as repayment.

The refinery, which is estimated to cost $19 billion, has been delayed for several years and is projected to commence operations in 2025. Construction was also delayed due to COVID-19 outbreaks among workers at the site and delays getting materials, according to sources.

Having cashed in for years in Nigeria, through the supply of mega tenders and being part of lucrative crude-for-fuel swap deals for over a decade, getting a hold of Dangote’s fuel will give traders like Vitol and Trafigura, control over a principal set of new oil flows.

Under the new oil bill, approved last month after nearly 20 years of political wrangling, fuel-import license requirements have now been approved, which experts fear will give Dangote an effective monopoly.