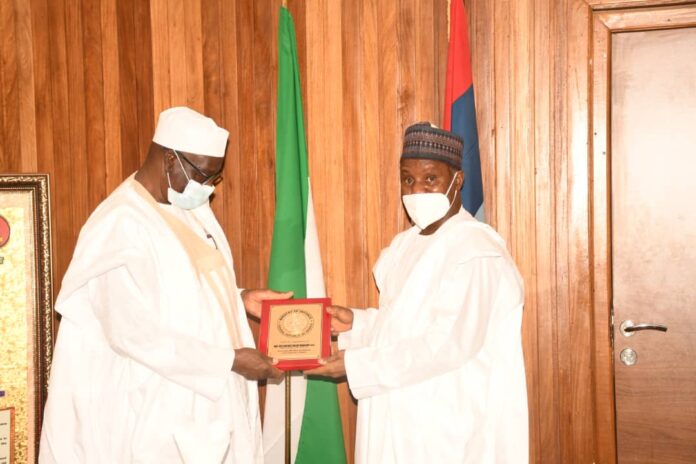 … ADVOCATES PROPER FUNDING TO WIN HEARTS AND MINDS IN NIGERIA

The Minister of Defence, Maj Gen Bashir Salihi Magashi (Rtd) is recommending a new psychological framework as Non kinetic strategic instrument to winning the hearts and minds of Non – state actors who are threatening national territorial integrity and sovereignty.

He challenged the committee which he said has an hurculean task to deliver on its mandate to restore normalcy in the dark spots of actions infected by the virus of terrorism, banditry, kidnapping and other forms of criminal activities.

While applauding the initiative of setting up the Committee to deepen national concerns for the country to end insecurity, he appealed to people of proven integrity and patriotic leaders to render quality service that will add values to the project of winning the hearts and minds in Nigeria against all vices and criminal tendencies.

The Minister who availed the committee with strategic guidance and advice towards charting a direction that will lead to the actualisation of its mandate, said the committee cannot afford to fail the nation.

Earlier in his remark the Director General National Orientation Agency Dr. Garba Abari said the committee deemed it necessary to solicit partnership with the Ministry of Defence.

The Director General who emphasized the importance of the partnership with the ministry, revealed that two members should be nominated from the ministry to join the committee to drive the influence operations in the country.

Dr Abari stated that when the committee becomes operational it intends to adopt multi – sectoral and multi – stakeholders approach to win the hearts and minds in Nigeria , urged Nigerians to buy-in to the National action plan towards curtailing violent extremism in the country.

He thanked the Minister for identifying with the Influence Operations and assured him that the committee will not leave any stakeholder behind with its moving train roaring to get to the planned destination towards emplacing a peaceful and secured nation of peoples dream and national aspirations.

Signed:
Mohammad Abdulkadri
Special Assistant to the Minister of Defence on Media and Publicity
26 – 03 – 2021

SEE VIDEO AS COUPLE DIE WHILE HAVING S*X IN THEIR CAR...