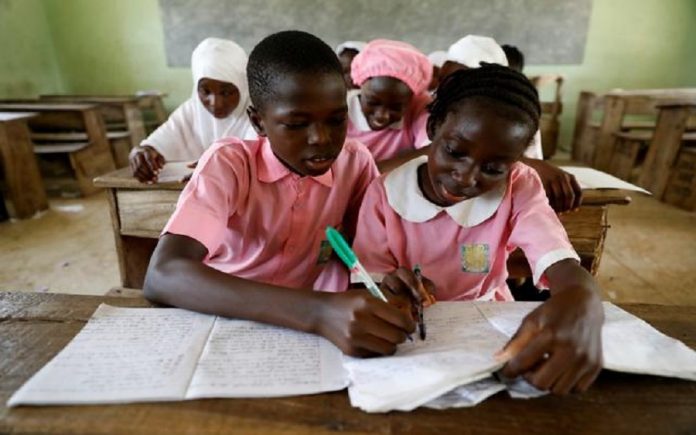 Stanley’s world came crashing down when he lost his job at a media house at the start of the year. What kept bugging his mind was how he was going to meet his primary obligations as a father, his children’s school fees.

To make matters worse, the school recently notified parents of an impending increase in tuition fees, in line with the skyrocketing prices of goods and services in the country.

Added to this, is the burden of his house rent which expired in August, bringing the father of four to a crossroads where he is seriously considering withdrawing his children from school.

“I had no choice but to plead for three months to secure another apartment and pay the school when it became obvious that getting another job may not happen as soon as I expected.

If I can’t pay the school fees by the end of November, I will withdraw my kids from school and help them privately prepare for major examinations like Junior WAEC and GCE,” he lamented.

Stanley is not alone in this quagmire brought on by Nigeria’s crushing inflation rate, incessant depreciation of the naira and severe economic crunch.

There are indications that the rising cost of tuition and other education-related expenses may force parents to delay payments or downgrade their wards to cheaper schools as children in primary and secondary schools return to the classroom on Monday, September 13, 2021.

In an interviews, several parents told journalist that they could no longer afford their wards’ tuition fees due to the prevailing economic hardship that has whittled down their purchasing power, leaving them financially incapacitated.

While some parents told journalist that by their projections, tuition payments are unlikely until at least the end of November, others hinted at the possibility of downgrading their wards to cheaper schools and possibly supplementing with private home tutorship.

A number of severely affected parents also revealed plans to withdraw their wards from school, for an unforeseeable period of time, if their financial situation remained static.

Among the middle and upper-class parents surveyed, a few respondents told reporter that they have requested moratoriums from proprietors of schools.

A moratorium is a legal authorisation to debtors to postpone payment. It can be obtained by parents (though not yet popular in Nigeria but in India), to prevent the proprietors of schools from taking legal actions against them.

A parent whose children attend one of the Tier-2 schools around Oregun told journalist that his children’s school had informed him of a 15% increment in the tuition and school bus fees from the new session, which begins on September 13, 2021.

Unfortunately, in July 2020, his employer (one of the Petroleum marketers based in Lekki) gave him the option of either accepting a 40% pay cut in July or resigning. Without mincing words, he chose the pay cut.

As if that was not enough, in July 2021, the management of his company sent an email to about 40% of its workforce, asking them to stay at home pending the time the economy will rebound, while 50% of the remaining staff were asked to work from home with a further 25% pay cut.

He said, “I accepted the pay cut because it pays me to take a pay cut, than being out of a job. At the point when I got the email, I knew it would be tough to make ends meet, especially paying school fees. I had to resort to a ride-hailing side hustle to survive.

“I could afford to pay the fees for the three of them, but our rent will be due in October. I asked the school to give me till the end of November to pay up so as not to get overwhelmed by the piling expenses.

“As expected, the school said ‘No’, adding that ‘No fees, No resumption.’ I may have to move them to another school closer to the house, which is about 40% cheaper.”

Ade Caleb, another concerned parent described her dilemma as being stuck between paying exorbitant fees and changing her kids’ school.

According to her, the school has not only increased her three boys’ school fees by 20%, but also raised the cost of other co-curricular activities, textbooks, exercise books and uniforms by 25% each.

That is not all. She also lamented the increasing cost of school bags, shoes and other back-to-school materials.

“The cost of quality education is gradually becoming unbearable for some of us. I understand it is not entirely the fault of the schools too, as the cost of everything has been on the increase for years but the management should consider the fact that our salaries have largely remained the same.

To cut the expenses, I have suspended the school bus arrangement and made other plans to drop and pick my children. I have also fixed and cleaned their former school bags which we had abandoned.

“I would have changed their school to a cheaper one if the school authority had not agreed to let me differ payment of the tuition till the end of October 2021.

Also, the total cost of securing a new school, which offers lower quality, is quite close to the fee I am expected to pay to the old school.

Though, I understand the cost will reduce subsequently, if I have not secured a better job by the next session, I will change their school,” she said.

These parents are only a handful of the thousands of others struggling to pay their wards’ tuition as schools resume while also meeting other obligations.

Many of these parents have lost their primary sources of income and for those whose wards attend private schools, many are considering stepping down to cheaper alternatives as the economic pressure mounts.

No doubt, schools are cheaper in some areas of Lagos than others and averagely, outside Lagos than within the commercial nerve centre of the nation.

An educationist, Tobi Aboaba, explained that the impact of job losses/salary slashes due to COVID-19 lockdown last year would be felt harder this year as students resume fully, and next year as well, as many parents may be forced to reduce their standard in the choice of schools because of their financial situations.

He said, “Financial hardships caused by the Covid-19 pandemic had hit parents with wards in private schools harder than public schools. I think you will see a decrease in enrolment in private schools in September 2021 and 2022 too.”

Gbenga Ajayi, another educationist, agrees with Aboaba on the increasing heat expected in the education sector due to job losses of some parents.

According to him, the solution is for governments across the Federal and States to restore the glories of unity and states schools in order to create alternatives for parents, whose incomes are limited.

The educationist also emphasized the need for parents to secure the future of their wards by investing in education funds, as that will help them prepare for any unforeseen risks ahead.

“Education fund is a very smart thing to do because it is money set aside for the purpose of investing in your children’s education.

This is a very wise thing to do because as you may well know, availing a child proper education is one of the best investments any parent can ever make, especially in this part of the world.

More questions than answers arise as regards the overall preparedness of states for school resumption amid the ongoing third wave of infections and the threat posed by the Delta variant whose presence in the country has been confirmed.

As thousands of children return to school on Monday, there are fears that many schools still do not have basic preventive measures in place to prevent local outbreaks as agencies involved are rumoured to have adopted what some experts described as COVID-19 ‘Civil service’ management style.

Recently, the Lagos State Health Commissioner advised that the civil service should not be used to structure or manage any-pandemic, instead, a quick policy should be developed to raise funds for effective pandemic management, otherwise, the whole system would go down.

Abayomi disclosed that Lagos was emergency ready to defeat an imminent deadlier fourth wave of the COVID-19 pandemic and future pandemics in the state, adding that the state had learnt from the first three waves.

MOTHER OF 2 DIES IN LOVER’S HOUSE DURING SEX ROMP