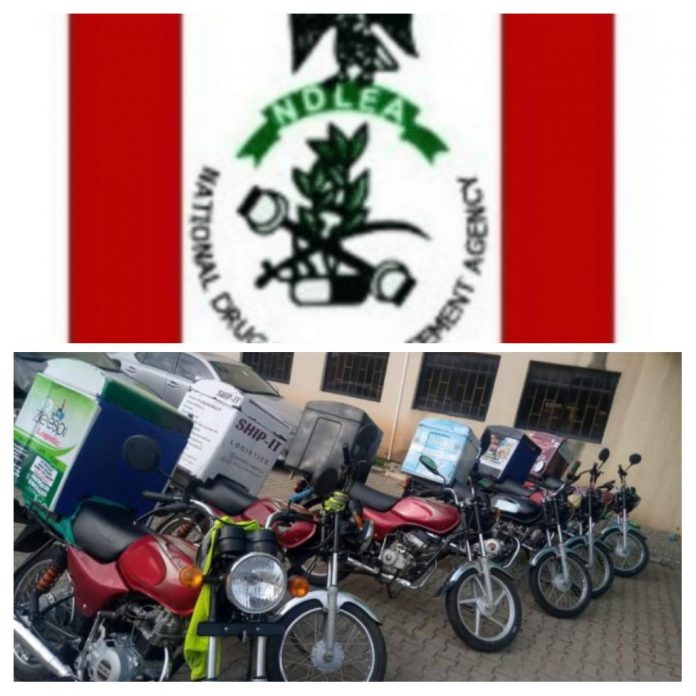 The National Drugs Law Enforcement Agency, (NDLEA), yesterday, disclosed that dispatch riders had become distributors of hard drugs and illicit substances, vowing to beam its searchlight on them.

The NDLEA Lagos State Commander, Alumona Callys, made the disclosure while addressing journalists on its activities in the past six months, in commemoration of the  International Day against Drug Abuse and Illicit Trafficking.

He revealed that from December 2021 to date, the command arrested 336 suspects out of which 56were convicted. He said  97 drug users were counselled and transferred from the Supply Reduction (Investigation Department) unit, and while57,330.573 kilograms of hard drugs were also seized within the period.

He stated that the command would not relent in its effort to restore sanity in the fight against  Drug Abuse and Illicit Trafficking, throughthe arrest of dealers and users of narcotics and psychotropic substances, no matter their social status.

Warning those still in the business, he said, “  our message is; “Stop while there is an opportunity to.

We will intensify our effort to rid Lagos of illicit drugs and save our children from the destruction that illicit substances cause, both to the Individual, family, community, economy, social life and security among others.

To achieve this, he appealed to governor Babajide  Sanwo-Olu to assist and strengthen the Agency with logistics that would enable it to carry out its duties, and“to partner with us to launch War Against Drug Abuse in the State to stem the dangerous tide of substance Abuse and Trafficking.

The command appreciates the synergy between the security agencies in the state which has led to numerous  seizures of illicit drugs”.