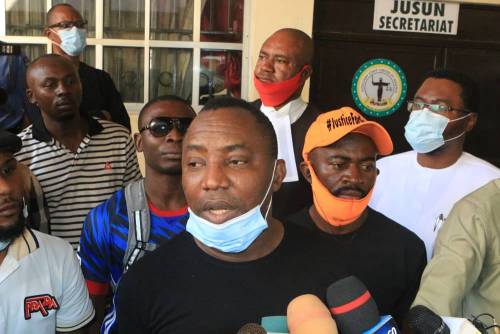 But he was interjected by Sowore (the first defendant), who told the court that he never asked the lawyer to represent him.

There was a mild drama at the Wuse Magistrate Court in Abuja on Monday as the Nigeria police arranged for fake lawyers to defend human rights’ activist, Omoyele Sowore, and four others, as part of the desperation of the Force to nail them on trumped-up charges.

The activists were last Thursday arrested and brutalised for organising a candlelight procession on crossover night to usher in the New Year at Gudu junction, Abuja.

The police had reeled out charges against the activists bordering on criminal conspiracy, unlawful assembly and inciting public disturbance with the aim to overthrow the government of President Muhammadu Buhari.

Arraigned alongside Sowore were Peter Williams, Sanyaolu Juwon, Emmanuel Bulus and Damilare Ademila; they were brought to the court under tight security.

The activists told the court that they were not given an opportunity to contact or notify their lawyers.

But drama ensued shortly after they had pleaded not guilty to the charges brought against them.

After the police lawyer, James Idachaba, mentioned appearances and it was the turn of the defence team to mention appearances, a group of lawyers led by one G.O. Bule, stood up.

Bule then told the court that he was there to represent the defendants.

But he was interjected by Sowore (the first defendant), who told the court that he never asked the lawyer to represent him.

He said they were to be represented by Femi Falana’s Chambers, and not G.O. Bule as claimed.

He wondered how a lawyer he had never engaged or come in contact with could barge into the court to represent him.

Sowore said the police prevented the five activists from using their mobile phones to notify their lawyers of their arraignment and charges.

The activist therefore urged the court not to recognise the lawyer.

Having sensed that his game was up, the lawyer quickly announced his withdrawal from the case but insisted on remaining in the court to observe the proceedings.

The magistrate, Mabel Segun-Bello, after she had listened to Sowore’s submission, ordered the police to avail the defendants an opportunity to use their mobile phones to call the lawyers of their choice.

She added that the charges filed against the activists were bailable offences and the provision of Section 36, Sub-Sections (a), (b) and (c) states that anybody charged with criminal offence must be given fair hearing and informed properly in the language they understand.

Also following the complaints by the defendants of the inhuman treatments meted out to them by the police where they were being held, the magistrate was compelled to call the Wuse Divisional Police Officer in an attempt to relocate them, so they could have access to medical treatments.

Meanwhile, all efforts to reach the DPO were not successful, so the magistrate ordered that they should be remanded at Kuje Correctional Centre.

Their lawyer, Marshal Abubakar, had told the court to allow his clients to be kept in the hospital till Tuesday to enable them to have access to medical treatment but the prayer was declined by the magistrate.