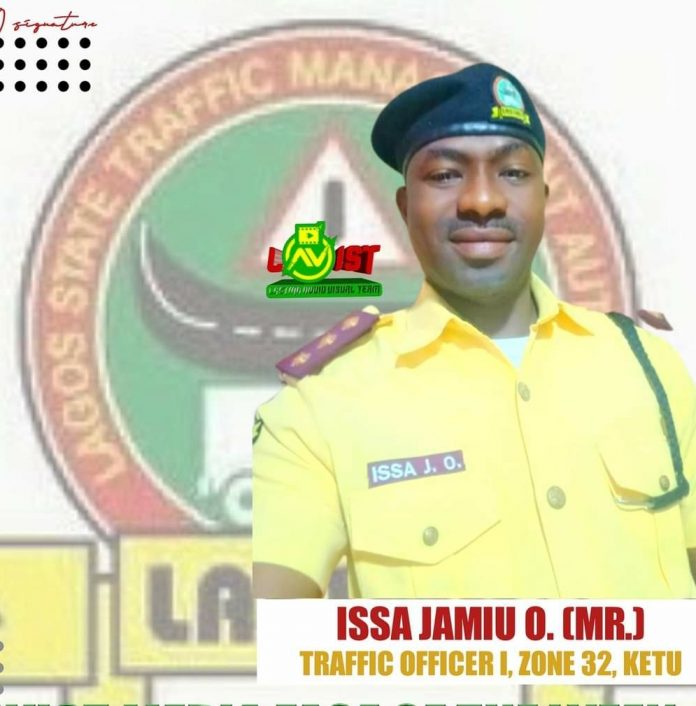 The Lagos State Traffic Management Agency (LASTMA) has said a bus driver knocks down and runs over one of its officers at the Ajah area in Lagos.

In a press statement e-signed and released to the National Association of Online Security News Publishers, NAOSNP by the Agency’s Spokesperson, Mr. Filade Olumide stated that, “The driver of a green Toyota Sienna vehicle, with Reg. number, FST 901 AR, knocked down and run over a LASTMA official, Jamiu O. Issa, who was later confirmed dead, this early morning on the 19th of April, 2022.”

According to Olumide, “The Late Issa was said to have approached and accosted the Sienna vehicle driver who was driving against the direction of flow of traffic (One-way) facing oncoming vehicles from Chevron towards the Conservation Toll Plaza.”

“It was reported that Issa, the LASTMA patrol team leader in Ajah, who accosted the driver by standing inside the driver opened door was knocked down and run over by the traffic law offender, who had pretended to be alighting from the vehicle but changed his action and tried to escape by reversing the vehicle, knocking down Issa with the opened door while the front tyre also ran over the officer, this action fatally injured Issa in the process.”

Issa’s colleague at the scene of the event quickly put a call through to the zonal head while some good Samaritans/eye witnesses pursued the escaping Sienna driver to the Chevron Waterfront area where he was eventually apprehended and taken first to Ilasan Police Station, and eventually to Ajiwe Police Station, under which jurisdiction the event happened for proper investigation.

Also, according to other eye witnesses’ accounts, the Sienna driver also knocked down another person while trying to escape from the scene before the driver was apprehended.

At the same time that the above scenario was going on, the fatally injured Issa was rushed to the Lagos Island General Hospital where it was confirmed that he was brought in dead (BID). His remains have been deposited at the morgue of same hospital.

The LASTMA General Manager, Bolaji Oreagba, who is grieving, commiserates with the family of the deceased officer. He has also said that in-spite of several appeals and warnings to the public to desist from assaulting and injuring government officials, some unscrupulous elements in the society who have refused all entreaties would be made to face the full wrath of the law.

Oreagba also noted that, this occurrence would not discourage the officers of the agency from continuing to carry out their duties and responsibilities as enshrined in the law that set up the agency. He therefore, appealed to the general public to abide by the Laws governing the State in order not to run foul of the law and its attendant consequences.

BUILDING COLLAPSED IN LAGOS ISLAND- ONE DIES, OTHERS RESCUED

BEHOLD 6 SHOWS AND MOVIES ON GOTV TO GET YOU THROUGH...