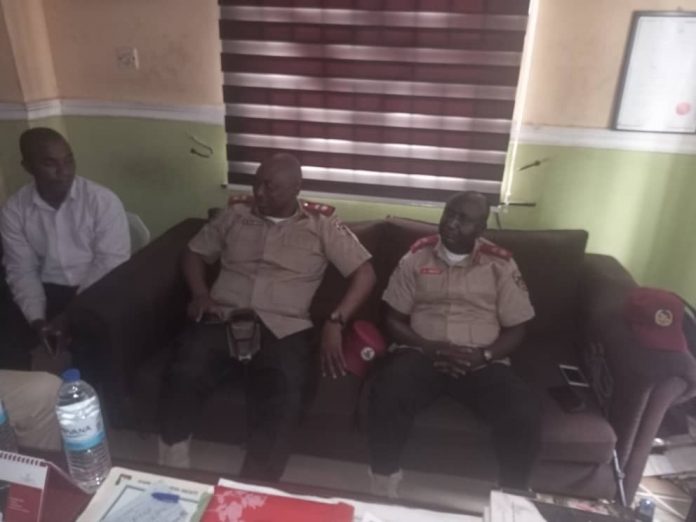 As part of her efforts to ensure free flow of movement on Lagos-Ibadan during the Easter celebration, the Sector Commander FRSC Lagos, Corps Commander Olusegun Ogungbemide with his Ogun State counterpart, Corps Commander Ahmed Umar has held a meeting with officials of the Federal Ministry of Works.

In a press statement e-signed and released to the National Association of Online Security News Publishers, NAOSNP by the FRSC Lagos Spokesperson, Route Commander Olabisi Sonusi stated that, “To ensure free movement on Lagos-Ibadan during the Easter celebration, the Sector Commander FRSC Lagos, Corps Commander Olusegun Ogungbemide with his Ogun State counterpart, Corps Commander Ahmed Umar held a meeting with officials of the Federal Ministry of Works led by Engr. Adebote on Tuesday 12th April, 2022 at the FRSC Mowe command.”

According to Sonusi, “After the meeting, the team inspected the level of work at the construction site on Lagos-Ibadan expressway and it was unanimously agreed that all diversions at the constructions spots should be opened from Thursday 14th April till Tuesday 19th April, 2022 for easy and seamless movement by motorist plying the road since there will be high influx of vehicles traveling in and out of Lagos during the festive season.”

“Olusegun Ogungbemide used the opportunity to inform the public that FRSC Lagos is ready to provide the necessary safety and traffic control needed by motorists during the Easter special patrol as over 2000 personnels (both Regular and Special Marshals), 57 patrol vehicles, 8 Bikes, 3 Ambulances, 2 Tow trucks, 7 Breathalyzers will be deployed on major highways in Lagos State, to monitor, control traffic, and clear obstructions along critical route within the State during the Easter Special Patrol exercise.”

FRSC Lagos Sector Commander admonished road users to play their role by obeying rules and also cooperate with the FRSC officials and sister agencies along the critical corridors in ensuring free flow of traffic and a crash free celebration”.

He finally admonished the public to always call the FRSC toll free number 122 in case of any emergency on the highway.