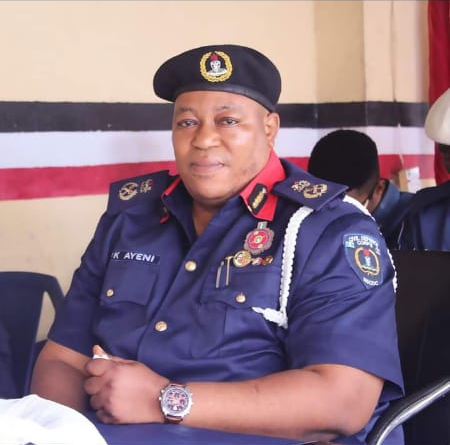 …Reiterates it’s purpose and importance and affirms the security of lives and property in Lagos State.

…Lagos NSCDC to Support, in the Fight Against Cultism and Other Vices in Lagos State

The Nigeria Security and Civil Defence Corps, Lagos State Commandant, Commandant Ayeni PK has felicitates and assures all Christians and all others, in State of 24 hours guaranteed security of lives and properties as the observe the 2021 Easter celebration.

The Easter celebration message is contained in a press released by the State Command’s Spokesperson, ASCI Abolurin Oluwaseun stated,

“Good Friday is a day many Christians, around the world observe, on the Friday before Easter Sunday. The day commemorates Jesus Christ’s Passion, crucifixion, and death, which is told in the Christian Bible. It is the day after Maundy Thursday.”

“The Commandant Nigeria Security and Civil Defence Corps, LAGOS STATE COMMAND, Commandant Ayeni PK MSC MBA ANIM ACIA, felicitates with Christians and all others, in Lagos State as they celebrate the passion, crucifixion and death of the Lord Jesus Christ.

In the same vein, the Commandant wishes to assure all residents, of Lagos State, of 24 hours guaranteed security of lives and property during the holiday.

Finally, however, Commandant Ayeni, uses this year’s 2021, Good Friday, to apprise all criminal elements and particularly, vandals in the state to desist from their evil and dastard act, of economic sabotage or be ready, to face the music.

He assures that the command will not go to bed, during the holidays but rather remain fervent and committed to its duties, of fulfilling its statutory mandates as provided by the law.

Lagos NSCDC to Support, in the Fight Against Cultism and Other Vices in Lagos State.

In another development, Commandant Ayeni PK was ably represented, by the Area Commander Lagos West Area Command – Agege, Assistant Commandant Ike George, at the launching of Police Campaign Against Cultism and Other Vices (POCACOV), held at Police College Ikeja, Lagos, on the 1st April 2021.

The Assistant Commandant was also accompanied to the POCACOV launching, by officers and men drawn from various divisions such as: Agege Division, Ikeja Division, Ifako Division etc.

The Area Commander Lagos West – Agege, speaking at the event, established that the Lagos Command already have an existing memorandum of understanding with the state, in the aspects of securing the students and monitoring the activities of these students, in the schools.

He said that cultism is one of the social vices, indulged in, by these students and youths today. He also affirms the Command’s readiness, to support our amiable Nigeria Police Force and the Lagos State Government, in the fight against cultism and other social vices in the state.

Finally, he also appreciates, the Lagos State Government, for being proactive, in nipping cultism and other social vices, in our society, on the bud. He appeals that more opportunities should be opened, for the youths as ‘an idle mind, is the devil’s workshop.’

MAINA WILL BE EXTRADITED TO NIGERIA SOON —POLICE

IF ROTIMI AMAECHI WILL BE NIGERIA’S PRESIDENT…KENI AKINTOYE