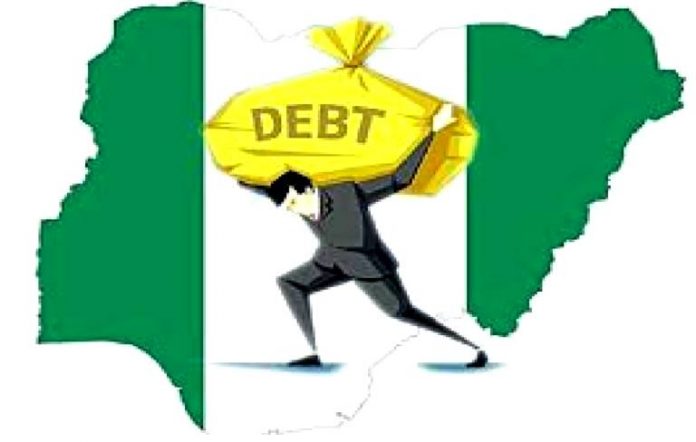 *FG has a lot to show for loans taken; critics of Buhari on borrowing  insincere — Lai Mohammed

*Careless use of debt as financing tool dangerous, FG‘ll come under pressure to repay debt in medium term — Securities dealers

The Minister of Information and Culture, Alhaji Lai Mohammed, yesterday justified loans taken by the federal government, saying it had done a lot by virtue of the facilities.

But experts, including a political economist, Professor Pat Utomi, disagreed with the minister, wondering why  government waited till the twilight of its tenure to take more loans and push the nation on the path of debt.

It will be recalled that there had been outcry over frequent borrowings by the government of President Muhammadu Buhari.

But Mohammed, who spoke at a town hall meeting in Maiduguri, Borno State, said the loans are being used, among others, to address the nation’s infrastructure deficit and not for recurrent expenditure.

“Naysayers have recently ramped up their criticism of the Buhari administration for borrowing. These critics are insincere. We are not borrowing for recurrent expenditure or to pay salaries.

“We are borrowing to build world-class infrastructure that will benefit generations of Nigerians. We have a lot to show for the loans we have taken.

“There is a road project in every state. Today, we have started the countdown to when the second Niger bridge, which successive administrations have built only on paper, will be completed. The list of projects we are handling with the loans we obtained is long,’’ he said.

Mohammed, who lamented that the destruction of public infrastructure is worse than imagined, added: “For example, we were told that it would cost the federal government N3.8 billion to repair just four bridges that damaged by vandals and petrol-laden tankers.

“That’s a huge amount that could have been used to build new infrastructure. It is common knowledge that massive infrastructure deficit is among the challenges we face in Nigeria.

“This is why the Muhammadu Buhari administration has deliberately adopted an inclusive infrastructure provisioning framework that spreads to all sections of the country.

“Despite a drastic drop in revenues and competing priorities, especially that of battling insecurity, the Federal Government has invested heavily in providing new infrastructure, as well as reconstructing and rehabilitating existing ones.”

“For example, in their time, they claimed to have spent billions of Naira in building infrastructure, but as one can see, their infrastructure projects were only on paper.

“Today, we are still saddled with looking for resources to build the same infrastructure for which they claimed to have allocated huge resources.

“We will not be deterred by the antics of those who believe they can play politics with everything.”

The minister added that the insurgents would fail in their bid to use the destruction of power and communications infrastructure to inflict pain on the people, saying the military was decimating them.

The minister said Borno was chosen as venue because Maiduguri had been cut off from public power supply since January due to the destruction of power infrastructure by terrorists.

“The terrorists who are destroying power and telecommunication facilities in Borno, have chosen to weaponise these attacks in order to inflict  maximum hardship on the people and also slow down the advances of our gallant troops in decimating them,” he said.

He said the town hall meeting would help to create in the public mind that government property were  citizens’ property and must be protected for the benefit of all.

He said it would help to sensitise communities, especially those where infrastructure were located to be conscious of the need to protect them.

Mohammed underscored the need to expose, arrest and prosecute all those who engaged in buying pilfered infrastructure items along with those who bring to them to sell and subject them to the full wrath of the law.

He said the town hall meeting would encourage the larger citizenry to support the widespread campaign on the protection and ownership of public infrastructure/assets.

The minister thanked the governor for hosting the event and appealed to all Nigerians to join the campaign on the ownership and protection of public infrastructure.

However, a political economist, Professor Pat Utomi, wondered why the present government is accumulating debts in the twilight of its tenure.

He said: “I personally don’t find a problem with targeted borrowing that would drive the country’s growth but asking the question, why is it that a lame-duck government is suddenly wanting to drive economic growth after six years of not doing it?

“Why is it that quarter to the good night of the regime they suddenly want to be funding the infrastructure deficit? That is just a simple question that a logical mind should ask.’’

Utomi earlier in an interview on Arise TV on Wednesday, warned that persistent borrowings by the federal government will push the country into another debt trap.

Careless use of debt as financing tool fraught with dangers – Adonri

Also reacting yesterday, Analyst and Vice Executive Chairman, HighCap Securities Limited, David Adonri, said: “Excessive borrowing by this government at the expense of the private sector which is the engine room of the economy, brings to question the soundness of their economic strategy. The careless use of debt as a financing tool is fraught with calamitous dangers.

“Even more disheartening is when the debts are principally used to finance consumption or to unwisely finance few secondary infrastructure (roads and rail). These will neither enhance the productive momentum of Nigeria’s light industries nor make the economy self-reliant.

“The disorderly growth of the economy this administration is pursuing can only mislead the country into an abyss if public borrowing is not curtailed to lower cost of funds so that production will be competitive.

‘’Nigerian government is reckless in its financial management. Their expenditure is far beyond revenues and safe debt level. If they do not retrace their steps by instituting prudent financial management and also promote development of primary infrastructure i.e. engineering infrastructure (technical education, metallurgical industry, electric power industry, chemical industry and modern energy industry), through private sector initiative, the only outcome will be continuation of economic wailings.”

In his reaction, Analyst and Head of Research and Investment, Fidelity Securities Limited, FSL, Victor Chiazor, said: “The current request by the Federal Government to approve further borrowing will initially come with some positive outcomes such as generating funding for infrastructural developments, increase our foreign reserve as well as improve the liquidity position of the government.

“However, in the medium to long term, as the country gets into election period, the government will come under pressure to repay the loan plus interest, and given our current loan servicing to revenue ratio, the government may not have funds to do any other thing outside  servicing its debt obligations. Given the government’s decision to go ahead with further borrowing, it needs to also focus more on revenue generation to enable it meet other important obligations.”

Meanwhile, against the backdrop of  controversies around Nigeria’s borrowing spree, a frontline economist and Chief Executive of Economic Associates, Dr. Ayo Teriba, has given further insight into the cost of debt burden, while offering some recommendations on way out of the threatening debt trap.

In a statement yesterday, Teriba said, “it is not clear what we should make of the well-established fact that interest payments on debt are perennially consuming nearly 100 per cent of  revenue available to the Federal Government of Nigeria. There is currently no consensus on the way forward.”

Commenting on fiscal projections contained in the Medium Term Expenditure Framework, MTEF, Teriba stated: “Considering the now established tendency for actual debt service to overshoot projections and actual revenues to undershoot projections, it should be obvious to most unbiased observers that the debt service to revenue ratios over the 2022-2024 horizon would be closer to the stark realities depicted by the recent out-turns in 2020 and January to May 2021 of 85 to 98 per cent of revenue than the wish-driven 43 to 56.5 per cent of revenue projected in the 2022-2024 MTEF.”

On dealing with the high debt cost, Teriba argues that fiscal policy thrusts have failed to address the primary portfolio management problem at issue, which, according to him, is “the urgent need to reduce or eliminate interest payments on existing debt stock through wholesale replacement of expensive commercial bonds in FG portfolio with interest-free commercial bonds that now abound at home and abroad.”

He explained further: “This portfolio management failure has absolutely nothing to do with subsidy regime, tax regime, costs of governance, revenue adequacy (liquidity), and debt sustainability (solvency). While these unquestionably deserve chapters in Nigeria’s unfolding financial narratives, they are red herrings in the chapter on minimizing or eliminating interest payments.

He pointed out that “the only sensible way to solve the problems presented by debt costs is to reduce or eliminate the debt cost itself; not increase revenue, increase tax, remove subsidies, stop borrowing, or reduce cost of governance.”

He said in spite of the debt cancellation secured by the Obasanjo administration, there was now more fiscal prudence than obtained under the 16-year rule of the Peoples Democratic Party, PDP, government.

“Everything considered, all the indices of Nigeria’s fiscal management between 1999 and 2020, indicates more prudence under the six years of President Buhari than during the eight years of former President Obasanjo, notwithstanding the claims of cancelling Nigerian debts,” Lukman said in a statement in Abuja yesterday.

He said the former President Obasanjo had forgotten this very legacy of being unable to prioritise capital expenditure during his tenure, especially given the successful debt cancellation, when he recently added his voice to those criticizing the decision of President Buhari’s administration to obtain additional loans.

However, Lukman said Nigeria might have to ask Obasanjo about the specific objective of Nigeria’s debt cancellation in 2004.

“Shouldn’t it have been for development? The resources that were freed from debt services, which component of the Federal Government budget was it used for?

“By the time the analysis is expanded to cover specific issues of projects executed, under the current administration of President Buhari, Nigerians would need help from former President Obasanjo, former President Goodluck, all PDP leaders and their supporters to highlight what specifically they were able to give Nigerians in terms of projects executed in return for their ‘prudent’ management of the national economy during their sixteen years tenure.

“For instance, President Buhari is implementing one of the most ambitious National Social Investment Programme (NSIP) in the country since independence. Under the programme, with the goal of lifting 100 million Nigerians out of poverty, millions of poor Nigerians are benefiting from these initiatives.

One of the components of the programme, Government Enterprise and Empowerment Programme (GEEP), N36.9 billion in interest-free loans of between N50,000 to N350,000 has been disbursed to more than 2.3 million Nigerians. Under another component of the Programme Home-Grown School Feeding Programme, 9.9 million primary 1 – 3 pupils in 54,952 public primary schools in 35 states have benefited.

Additional 107,000 cooks have been engaged. In the case of Conditional Cash Transfer, the third component, more than 3 million poor and vulnerable households have been registered on the National Social Register, out of which more than one million families are currently being paid N5,000 monthly,” he said.

Lukman added that notwithstanding all these and ignoring all the years of lost opportunities under 16 years of PDP, public debates around comparative assessments of performance of six years of APC government under President Buhari as compared to sixteen years of PDP get unfairly dominated by allegations of recklessness and incompetence.

FG BANS OVER 2,000 NIGERIANS AND FOREIGNERS FROM TRAVELING ABROAD AND...