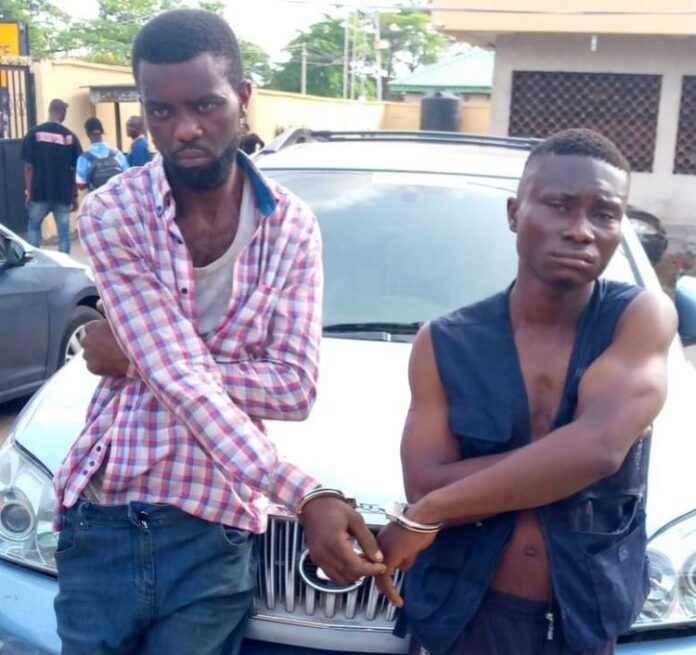 The Edo Police Command has arrested two men, Monday Imafidon and Ifeanyi Okafor, who stole the loot dropped by a four-man gun-toting gang that robbed a POS outlet of N5.2 million.

The robbery operation took place in Uromi, Esan north-east local government area of the state, where the hoodlums stormed the POS outlet on a motorcycle.

They robbed everyone in sight, including the operator.

Moments after the robbery, a detachment of police operatives and some residents gave the robbers a hot chase, following which they threw away their loot.

Though the robbers were arrested, Imafidon and Okafor and some others at large, took advantage of the chaos to steal the money.

One of the suspects confessed to stealing only part of the money.

“I saw people running after some men on a motorcycle and suddenly we saw plenty money. I joined other boys to collect the money. The total money we got was N2.5 million, all of us shared it, and I got N600,000”.

The state police image maker, SP Kontongs Bello, who confirmed the incident, said some cash had been recovered from the suspects.

“I can assure you that we will ensure the arrest of all those who took part in stealing the money at the armed robbery scene and ensuring a full recovery of the money,” he added.

CASUAL STAFF IN COURT FOR ALLEGEDLY STEALING 12 PACKS OF DRY...