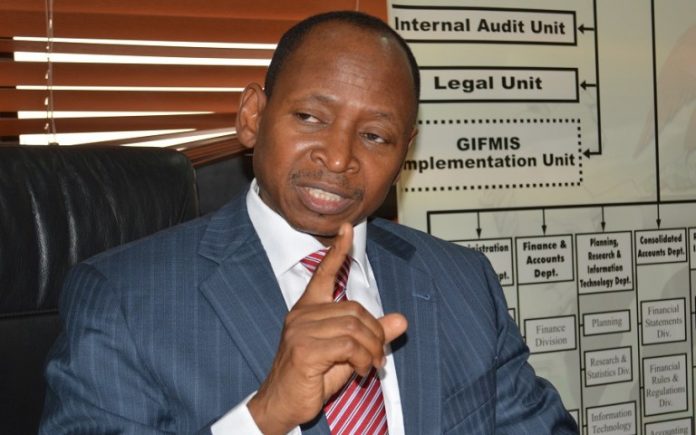 The suspended Accountant-General of the Federation, Mr Ahmed Idris, has been released on bail by the Economic and Financial Crimes Commission (EFCC).

This was disclosed by EFCC spokesperson, Mr Wilson Uwujaren, on Thursday.

He was arrested on May 16 over an alleged N80 billion fraud after failing to honour the commission’s invitations to respond to issues connected to the issue.

The anti-graft agency noted that his arrest was in “connection with diversion of funds and money laundering activities to the tune of N80 billion.”

The EFCC claimed that its verified intelligence showed that the AGF raked off the funds through bogus consultancies and other illegal activities using proxies, family members and close associates.

According to the EFCC, the funds were laundered via real estate investments in Kano and Abuja.

After his arrest, the Minister of Finance, Mrs Zainab Ahmed, suspended Mr Idris from his position according to her executive powers.

The suspension was contained in a letter dated May 18, in which the Minister explained that the move was necessitated by the need to “allow for proper and unhindered investigation into the serious allegations in line with Public Service Rules 030406”.

According to her, during the suspension period, which is without pay, Mr Idris is not “expected to attend to your place of work or contact any official in your Office except for any disciplinary hearing that may be.”

WHY CANNABIS CANNOT BE LEGALIZED IN NIGERIA NOW –MARWA ~ Fame...

WHY WE MIX HYPO, DETERGENTS AND POTASH WITH CASSAVA TO MAKE...