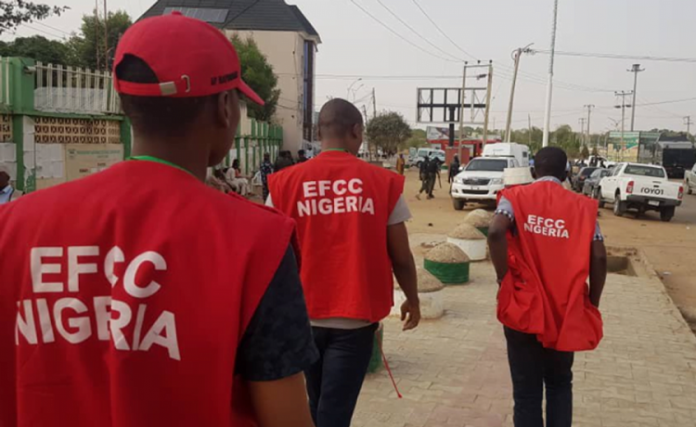 Forfeited properties were allegedly acquired from proceeds from FIRS DTA

The Economic and Financial Crimes Commission, (EFCC) has announced that it has secured an interim forfeiture of two landed properties worth over N104 million belonging to Aminu Sidi Garunbaba, a staff of the Federal Inland Revenue Service (FIRS).

The commission, through its lawyer, Ekele Iheanacho had brought before the court, an application pursuant to Section 17 of the Advance Fee Fraud and other Fraud Related Offences Act, 2006.

Justice Obiora Egwuatu of the Federal High Court, Abuja division granted the order on Wednesday while ruling on the application.

EFCC submitted that the respondent allegedly received N341, 971,950 between 2017 and 2018 from the FIRS as Duty Tour Allowance for travels that were never made.

According to EFCC, Mr Garunbaba had diverted the proceeds to acquire the forfeited properties. They, therefore, sought an order of the court for the forfeiture of the properties.

Justice Egwuatu granted EFCC’s application and directed that the interim forfeiture order be published in ThisDay and Punch newspapers, in order to alert anyone who has interest in the properties to come forth and show cause why the properties should not be forfeited to the Federal Government of Nigeria.

He then adjourned till March 23, 2022, for consideration of the motion for final forfeiture of the properties.

Report had earlier that Justice Nkeonye Maha of the Abuja division of the Federal High Court had ordered the final forfeiture of 24 properties worth N10.9 billion belonging to a top military officer.

WEALTHY PEOPLE WITH N1BN Q WORTH, BUT OWING BANKS N10BN ARE...

“HAVING A GOOD WIFE IS A GREAT BLESSING” – MERCY AIGBE’S...