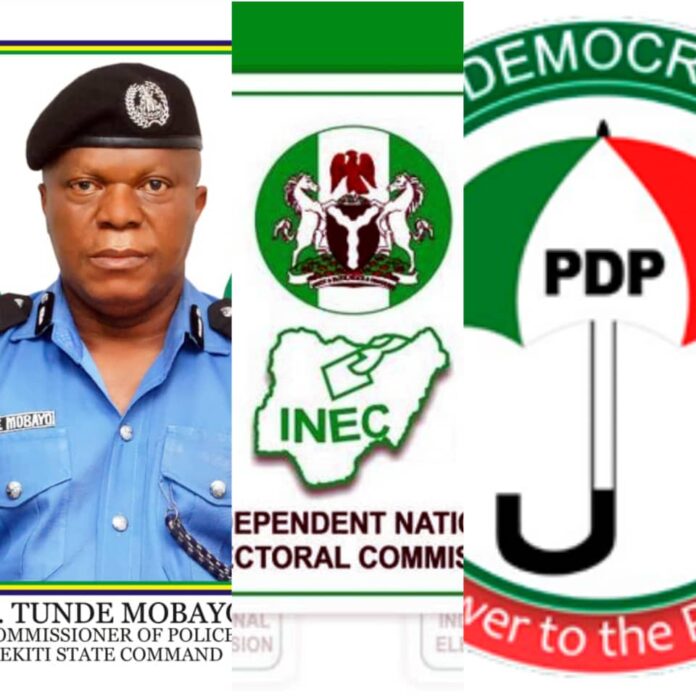 *Southwest PDP Fingers Ekiti CP in the Killing of Policewoman, Others

The South West Peoples Democratic Party (PDP) has said that the Ekiti State Commissioner of Police, Babatunde Mobayo, must be held responsible for the killing of a policewoman and two others during the House of Assembly bye-election in Ekiti East Local Government area of Ekiti State on Saturday.

In a statement by the Party’s Zonal Director of Media and Publicity, Lere Olayinka, the Police Commissioner was accused of shielding government thugs, even after credible evidence of their criminal acts were presented to him.

The party said it was sad that blood-letting always follow Fayemi’s footsteps whenever he is at the helm of affairs in Ekiti.

“During Fayemi’s first tenure, it was in this same Omuo Ekiti that Michael Ipinlaye and Kehinde Fajuyi were killed by his (Fayemi) thugs while Foluso Ogundare was killed in Akure Ekiti and Ayo Murphy Jeje and Juliana Adewumi were killed in Erijiyan Ekiti.

“Also, during the 2019 local government elections in which only APC contested, one person was killed in Ikere Ekiti,” Olayinka said.

Continuing, the PDP spokesperson said: “Sad that just because of a House of Assembly bye-election, a policewoman was killed in Omuo Ekiti today, by thugs unleashed on the people by the APC government of Dr Kayode Fayemi.

“May be the Police Commissioner in Ekiti State, Mobayo Babatunde will act now that one of his officers was killed in Omuo Ekiti today, by Fayemi’s thugs.

“When the thugs sent to assassinate me and Dayo Akinleye invaded GNN Hotel in Ado Ekiti on October 24, 2020, and CCTV footages were made available to the police, nothing was done.

“Today, the thugs have killed a policewoman and two other people.

“Let’s see what Ekiti State Police Commissioner will do this time around.

“And most importantly, let’s see if CP Mobayo will stop being complicit in government sponsored attacks in Ekiti State by arresting those killers led by Dele Omojola (Marshall) who invaded GNN Hotel in Ado Ekiti and attempted to kill myself and Hon Dayo Akinleye on October 24, 2020.

“As for us in the South-West PDP, the blood of that police woman and the two other people killed in Omuo Ekiti today, will be on the head of CP Mobayo because he refused to act decisively when he should.”

In his response, CP Mobayo denied the allegations, warning that no one should draw the Ekiti Police into politics. He added that the Command swung into action on getting wind of the violence, stressing that some ‘key suspects’ have already been arrested, and investigations have commenced.

“It should be noted that the police Command in Ekiti swung into action immediately the incident was reported and arrests were made of key suspects. Investigations have since commenced and all culprits shall be charged to court accordingly.

The Command therefore warns against dragging the Nigeria Police, especially CP TUNDE MOBAYO, into politics, while also stating that the allegation, which is aimed at misleading and misinforming the good minds of the citizens, should be disregarded,” a statement signed by the Command’s PPRO, ASP Abutu Sunday said.

The Command also said that the policewoman is not dead, but in critical condition receiving treatment in an undisclosed hospital.

INEC Resident Electoral Commissioner, Dr. Tella Adeniran, in a statement in Ado-Ekiti, said the commission suspended the poll following the violence unleashed on voters and officials of the electoral body by political thugs.

Adeniran explained that the election was peaceful until arm-wielding hoodlums stormed two polling units of ward 009 unit 008 and 009 and started shooting sporadically.

This development, the INEC boss, said led to the death of three voters while a police officer, Corps member and one of its staff sustained varying degrees of injuries.

U.S. SOY: MALNUTRITION IN NIGERIA IS A NATIONAL PANDEMIC

GDP: GROWTH OF DIGITAL SERVICES TO BOOST INVESTMENTS IN HOSPITALITY AND...