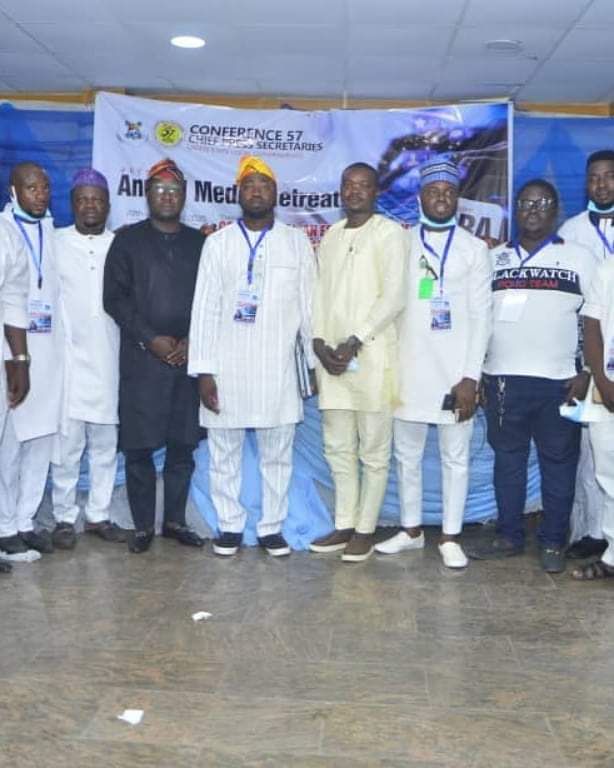 This year’s media retreat theme was: Going Digital: An Essential Move in a post COVID-19 World and combating fake news.

The annual media retreat serves as an avenue for the Chief Press Secretaries {CPS} to council chairmen across the 57 local governments and council development areas to learn, interact, explore new ideas and upgrade their media status in their various job task.

One of the founding members of the association, Saheed Akanbi Ade Afonja, who is also the Senior Special Assistant on youth matters to Lagos Governor,  Babajide Sanwo-Olu,  and whose immense contribution towards the formation of CPS’57  cannot be over-emphasized lauded the impact of CPS in the grassroots.

He said: “I sincerely appreciate the CPS for not only being the mouthpiece of the grassroots but also keeping them abreast of salient issues. The regulation of CPS renumeration to a standard rate and upgrading the office to supervisory level will be of great benefits to us all, we would try to push that.”

“As the grassroots CPS I urge you all to update the people about Lagos State developmental activities and the ministry of youth on information and plans that would empower and develop the greater Lagos youths.”. Afonja added.

In the same vein, Chief Press Secretary to the Governor of Lagos State, Hon. Gboyega Akosile in his short lecture at the event advocated for  the need to curb fake news.

According to the former head of news report at Minaj broadcasting, he said information is a vital tool at all levels of administration. He added: “Information is key at all levels, therefore I commend CPS’57 for efforts in reaching out to the general populace in the grassroots.”

He however opined that it is pertinent to know that in order to curb fake news dissemination; we all must fight against it.
’Ít is a collective efforts with actions, and not individual or government alone. If this can be achieve and proper use of fact check we would drastically reduce the dissemination of fake news.” Hon. Akosile added.

Speaking at the event, the guest speaker and veteran journalist, Citizen Jones engaged CPS on the impact of the day’s topic. The co-anchor at TVC popular ‘Journalist Hang-Out’ during his comprehensive delivery stated the negative effect of fake news and steps to be taken in order to avert it as a CPS.
“A CPS is a short window of the chairman”, he submitted.

Similarly, a fast growing digital company in Lagos State, Co-Creation hub representatives, Oyinka Akintola Bello and Habeeb Adebisi addressed the CPS on the various steps to take while curbing fake news. These they identified as; being proactive, identifying the message agenda, and fact checking news source among others.

Corroborating submissions of guest speakers and facilitators at the event, chairman of Conference 57 CPS, Oseni Owolabi Ajimomuiya, said measures were in place by the association to curb the menace of fake news in the society.

“Our major crusade in this regard is to enlighten the masses on the negative impact of fake news across various social media platforms.

“That’s why we tag this year’s retreat, Going Digital: An essential move in a Post COVID-19 World and Combating Fake News,” he said.

*YOU MUST BE PROACTIVE ON YOUR JOB TASK – EMMANUEL BAMIGBOYE, Council Chairman, Mushin Local Government Area*

Hon. Emmanuel Bamgboye, Chairman, Mushin Local Government, has urged Chief Press Secretaries {CPS} in the grassroots to be proactive in the execution of their job task.

He made this remark while delivering his speech at the annual media retreat for CPS at Spicery hotel in Jibowu-Yaba.

According to the chairman, Bamigboye he said that media aides must be proactive in disseminating information to the public.

“Your job is very valuable, this is the era of information, we need publicity in all levels of government.” He added.

He also commended the CPS for their loyalty on the job. He said: “We appreciate what you are doing but you should continue and do more with loyalty.”

He said that elected chairmen would continue to appreciate efforts of grassroots media aides which he described as very important and necessary in the grassroots administration across the State.

He urged the media aides to cooperate with their bosses and give adequate publicity to allow the residents know the level of development in the community.

Oluomo Saheed Akanbi Ade, Senior Special Assistant on Youth Matters to Governor Babajide Sanwo-Olu, has expressed his desire on the need for the establishment of youth affairs department across the 57 local governments and council development areas in Lagos.

The Senior Special Assistant on youth matters disclosed this on Sunday in Lagos at the annual media retreat of ‘Conference 57 Chief Press Secretaries’ {CPS}.

The governor’s aide said that youth department at the grassroots would help fast-track development across the state.

He said: “Effort is in progress, as there is need to establish youth affairs department in all local governments and LCDAs to make the job easier.

“So that if there’s anything happening in any council concerning the youth, it will be easier to contact supervisor on youth affairs in that council to fix the development collectively.

Akanbi added that there was need to review the remuneration of media aides for council chairmen in the state.

He said that reviewing their remuneration in terms of salaries and offices would assist in bridging the gaps between residents and the councils.

Akanbi, however, advised that spokespersons must be loyal to the council chairman and ensure that its activities and programs are publicized with diligence for consumption of residents.

Conference 57 CPS which is a forum of chief press secretaries for local councils in Lagos State held her annual media retreat for the third time ever since inception at Badagry in 2018.

The three days event held at Spicery hotel in Jibowu-Yaba afforded media aides in the grassroots to interact and proffer solutions to issues bothering on fake news and the impact of digital tools for effective job delivery among CPS in an anticipated post Covid-19 era.