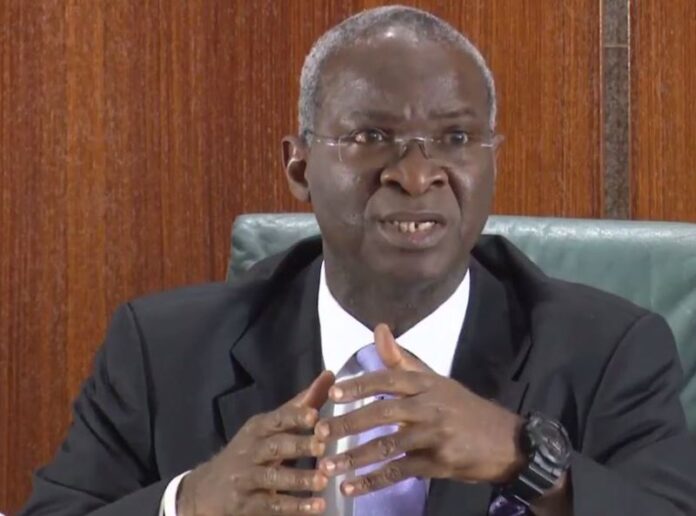 Minister of Works and Housing, Mr. Babatunde Fashola has said despite the far-reaching negative impact of the Covid-19 pandemic, 11 major contractors were deployed in 26 States since May.

The minister who said that his ministry had contributed to the efforts of the federal government to overcome the economic downturn occasioned by the pandemic, explained that the deployment was in addition to the work being carried out by the Federal Road Maintenance Agency (FERMA).

A statement by the Director of Press and Public Relations in the ministry, Boade Akinola, stated that Fashola spoke at the 26th National Council on Works in Port-Harcourt, Rivers State.

The former Lagos Governor said the impact of the disease on livelihood and the global economy led countries across the globe to design and implement measures and policies to keep their economies going and reflate them, saying that Nigeria also played its own part.

The minister said the federal government under the President Muhammadu Buhari developed the Economic Sustainability Plan (ESP) in order to provide employment, increase opportunities and sustain productivity with the ministry of works and housing as one of the focal MDAS for the implementation of the policy.

“By May, 2020, 11 of the biggest contractors of government returned to work in 26 states in addition to maintenance work by the Federal Road Maintenance Agency (FERMA) in 92 locations across 24 states of the federation.

“All these contributed greatly to economic recovery with an increase of 41.81 per cent in quarrying and other mineral deposits, 11.96 per cent in cement manufacturing and 2.64 per cent in construction,” the minister said.

He argued that there has been an increase in wealth distribution as a result of increased economic activities and job creation in communities where construction works were going on.

In his speech, the Rivers State Governor, Mr Nyesom Wike, noted that countries that have made progress in infrastructural development understand the link between building them and achieving progressive and sustainable development.

Wike said that Nigeria cannot be an exception if it must realise basic developmental goals and make life more meaningful for the people of the country.

Chairman Senate Committee on Works, Senator Adamu Aliero, in his remarks lauded the federal government for initiating various financial mechanisms such as the SUKUK Fund, the presidential initiative on infrastructure development fund for road construction and rehabilitation to complement budgetary provisions which he said are grossly inadequate.

He expressed the commitment of the national assembly to continue to support the developmental initiatives of the government to rev up the deteriorating infrastructure in the country.

HOW WE PRAYED FOR PASTOR ADEBOYE’S SON TO RESURRECT – NATHANIEL...