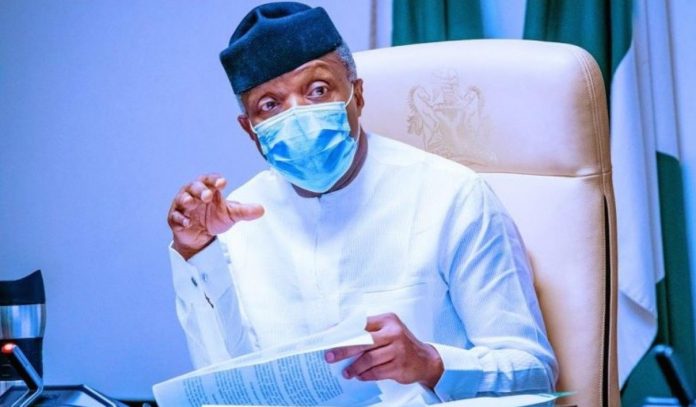 The federal government has expressed worry over what it described as inadequate investments in renewable energy to support the country’s intended accelerated transition from fossil fuels, which currently satisfy 83 per cent of primary demand for energy.

The government pointed out that while investments in fossil fuels had declined by 40 per cent since 2015, there is no requisite ramp up in renewable energy.

Speaking at the World Energy Day Discourse held over the weekend at the Abuja Chamber of Commerce and Industry (ACCI), Nigeria’s Vice President, Prof Yemi Osinbajo admitted that the planned transition would not be as easy and seamless as envisaged without having to make difficult choices.

He said, “The risks of trying to make 30-year commitments to reaching net-zero were plain and apparent for all to see. The Economist reported that since May the combined prices of oil, coal and gas increased by 95 per cent. It was also reported that Britain has turned back on some coal-fired power stations.

“I surely believe that the energy transition was not meant to make energy less available and unaffordable. These events if not handled carefully may turn global public sentiment against climate change policies.”

Represented at by the Minister of State for Power, Mr. Goddy Jedy-Agba, Osinbajo said the current challenging environment was as a result of a number of critical factors.

He said cost cutting in the energy industry had been exacerbated by the demand drops caused by the COVID-19 pandemic adding that investment in energy to meet net zero targets had also been insufficient.

He said, “We cannot execute this transition without gas. This particularly impacts Nigeria as in some respects we are more of a gas country than even oil. DPR reported in June that we have 207 trillion cubic feet of proven gas reserves.

The world cannot move to electric cars overnight, the world cannot expand renewables without stable baseload. Gas enables this transition with options for auto gas on vehicles and even more importantly gas power to replace dirty coal plants across the world.

Gas is cleaner than coal or oil and initially was touted as a critical transition fuel. Later, climate change policy (particularly in the West) began to turn against gas with very strict policies from many lenders against even funding upstream, midstream or downstream Gas projects.

This has created the proverbial “Chickens coming home to roost” scenario we face today with insufficient gas investment without commiserate replacement by renewables leading to scarcity and high prices.”

Osinbajo, however, pointed out that the Buhari-led administration had been at the forefront of the discussion on energy transition and had provided thought leadership on the position of gas in the new world.

He said Buhari had led key actions and supported the federal government to lead local and global discussions on the position of gas in the new world order.

He said the administration green lit the Nigerian Liquified Natural Gas Train 7 after so many years of delay.

According to him, “Train 7 is a N10 billion+ investment that will keep Nigeria in the top 5 globally in Liquified Natural Gas and position Nigeria to benefit from the critical role that gas will play in the energy transition. This foresight came even before the current challenges.

“Secondly, the administration launched the Decade of Gas under the Ministry of Petroleum Resources. Mr. President stated on March 29″, 2021 that: ‘When we declared 2020 as The Year of Gas in Nigeria, It was a bold statement to demonstrate our administration’s resolve that gas development and utilization should be a national priority. Now we going a step further to dedicate this decade to industrializing Nigeria using gas’.”

He said as part of the Decade of Gas concept, the Ajaokuta-Kaduna—Kano Natural Gas Pipeline is set for completion in 2023 adding that the pipeline will not only allow for the country to have gas power and industries across Nigeria but will also create the ability to ramp up renewables as “we will have baseload power to balance intermittent Solar Power Plants that need to be built to meet our climate goals.”

He said the federal government would also be driving a conversation on the “Just Transition” at this year’s COP-26.

The vice president nonetheless, commended the ACCI for being at the forefront of driving the right conversations at the right time to help policy makers and the private sector make sense of global and local trends to improve our national development

ENAIRA COMPLETED N46.3 MILLION WORTH OF TRANSACTIONS IN LESS THAN 2...

MULTICHOICE STARTS JANUARY ON A HIGH WITH STEP UP OFFER FOR...