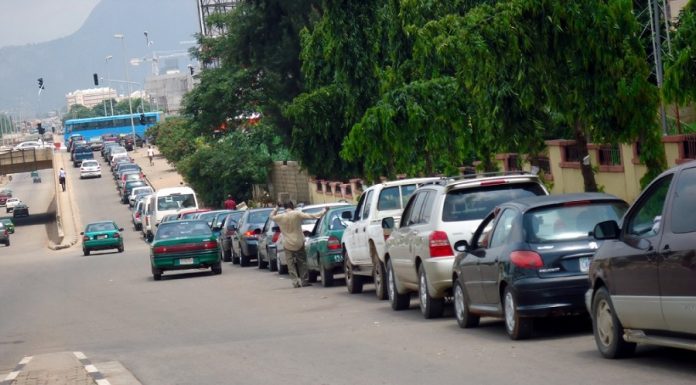 The Federal Government has provided reasons for the marginal fuel queues being experienced at filling stations in Abuja and some parts of the country.

This was made known by the newly appointed Chief Executive Officer of the Midstream Petroleum Regulatory Authority, Farouk Ahmed, while speaking with state house correspondents after he was officially presented to President Muhammadu Buhari at the Presidential Villa in Abuja, according to NAN.

Ahmed said that the queues were caused by the payment logistics in US Dollars by depot owners, and the issue is being addressed by relevant authorities.

Ahmed said that some of the depot owners are selling petrol above the ex-depot price because they are paying for their logistics, port charges and others in US dollars adding that they have to source for the foreign currency at the parallel market at higher rates.

He explained, “Basically, what happened is that some of the depot owners selling Premium Motor Spirit above the official ex-depot price of N148, are selling at N156 or N157.

“The reason is that they are paying for their logistics like shipping and Port charges and Nigerian Maritime Administration and Safety Agency (NIMASA) charges in US Dollars and they have to go to parallel market to source for the Dollars.

“The differential between the official exchange rate and the parallel market is their reason for adding between N9 and N10.

“But we had a meeting on Tuesday, Nov. 9, and the heads of the Nigeria Ports Authority and NIMASA, as well as other stakeholders were all there and it was resolved that NNPC excess capacity vessels would be chattered to oil marketing companies and they would be charging in Naira.

“NIMASA and the Ports Authority will also revert back to their supervising ministries and get directives to collect their charges in naira rather than US Dollars. I believe with these, there will be no reason for the depot owners to increase their price beyond the official selling price of N148.’’

Following the implementation of the recently signed Petroleum Industry Act (PIA) by President Muhammadu Buhari, economic experts and stakeholders in the oil and gas sector, have been clamouring for the full deregulation of the sector with the removal of petrol subsidy, which has become a drain on the country’s resources.

However, the federal government has maintained the removal of petrol subsidy will take off in the second quarter of 2022 after it would have finished negotiations with organized labour on palliatives for Nigerians.

The Group Managing Director of NNPC, Mele Kyari, assured that fuel subsidy removal would definitely be achieved in 2022 as it was now fully backed by law, adding that the price of the product may range between N320 and N340 per litre.