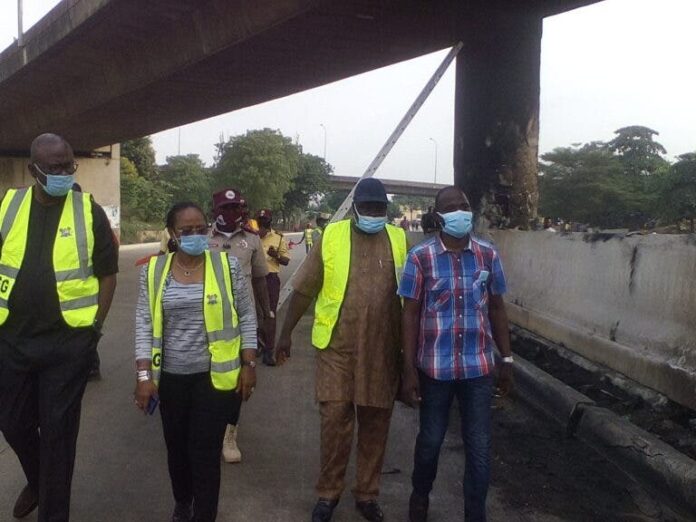 The Federal Controller of Works in Lagos State, Mr Olukayode Popoola, on Friday advised the public to stay off Airport Road Flyover in Lagos dangerously burnt by fire, pending the determination of its structural safety.

The bridge which runs over Toyota Bus Stop on the Apapa-Oshodi-Ojota-Oworonshoki Expressway being reconstructed, was engulfed by fire when a petrol tanker burst into flames on Thursday.

The federal and Lagos State governments on Friday carried out a joint inspection to know the extent of damage to the bridge and adjoining roads.

Leading the state and federal officials, Popoola raised concerns over the safety of the bridge, saying that its structural integrity had yet to be ascertained.

He told journalist during the inspection that samples were being taken from the burnt bridge for analysis to be able to ascertain the level of damage and where to carry out repairs.

Popoola said that 200 meters of the rigid pavement of the Apapa-Oshodi-Ojota-Oworonshoki Expressway reconstruction project, being carried by the Dangote Group, was burnt.

He added that the deck of the flyover was burnt and its pier badly damaged, raising fears of structural instability of the bridge.

The controller said that the bridge was barricaded after the fire because of safety concerns, regretting that the barriers were removed at night.

Popoola warned that there would be risks in using the bridge.

“We are taking some samples to go and analyse before we know the structural stability, but physically, a lot of damage has been done to this pier of the bridge.

“The integrity is already compromised.

“Yesterday the road was barricaded but in the night, some people went and removed the barricade.

“We are advising that members of the public should not take the risk of using this bridge,” he said.

Popoola said that about 200 meters of the bridge deck as well as the pavement of Apapa-Oshodi-Ojota-Oworonshoki Expressway being reconstructed was affected by the inferno.

He added that one of the piers – pillars of the bridge – was badly burnt, making the ministry unsure of the structural integrity and safety of the bridge.

He said that outcome of tests would ensure appropriate action on the flyover constructed by Julius Berger Plc, as well as the highway under reconstruction by the Dangote Group.

According to the controller, the Federal Highway Act empowers the Federal Ministry of Works and Housing to prosecute whoever caused damage to assets of the Federal Government.

“This Apapa-Oshodi-Ojota-Oworonshoki Expressway project is ongoing, and we have not even completed it. Now, due to carelessness of drivers, this fire occurred, and you can see the level of the damage.

Popoola noted that the ministry had been working in collaboration with Lagos State Government to tackle trucks’ menace and other infractions affecting road infrastructure.

The Special Adviser to Gov. Babajide Sanwo-Olu on Works and Infrastructure, Mrs Aramide Adeyoye, said that the state government, through its Ministry of Transportation, would embark on strict enforcement of road worthiness regulation.

She told journalist that the government’s agents would begin to enter depots and loading bays for petrol tankers to ensure that those not road worthy would not lift petroleum products.

“Oftentimes, they claim that the roads are bad. What do you say about this one now that the road is very good, there is no pothole anywhere,” she said.

Adeyoye said that truck accidents were most times caused by reckless driving.

She called for attitudinal change.

She said that fires caused by tanker accidents had caused much hardship on road users, urging that road unworthy trucks should stop coming into Lagos State.

She said that the support of the Federal Government was important in tackling the ‘hydra-headed monster’.

He said that investigations were on as regards the accident, adding that, if found guilty, the owner and the driver of the tanker would be prosecuted to serve as deterrent to other road users.