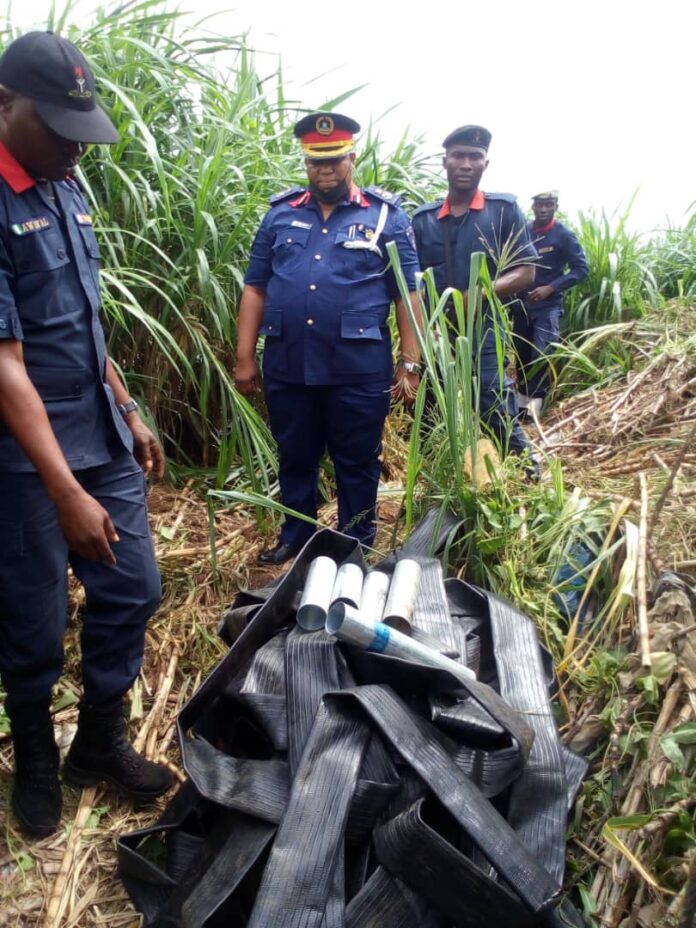 The Nigeria Security and Civil Defence Corps (NSCDC) Lagos State Command personnel on patrol at the IYANA-ODO axis in Alimosho Local Government Area at about 03:35hrs midnight of yesterday bursted some suspected oil pipeline vandals who were perpetrating their evil and dastard act inside the creek.

The vandals who had loaded a 30,000 litres capacity truck loaded with Premium Motor Spirit (PMS), popularly known as petrol met their waterloo as the NSCDC operatives on patrol whom were hinted via the Command’s robust ‘Community Based Intelligence Network’ bursted them at the scene of crime.

However, the actual quantity of content was yet to be ascertained though the suspected vandals took to their heels having sighted the combatant and galant team of our Anti- Vandal Unit on patrol at the Iyana – Odo axis and others from the state command.

The Commandant Nigeria Security and Civil Defence Corps Lagos State Command, Commandant Ayeni Paul Kolawole MSC MBA ANIM ACIA FCSS, having received the information swung into action and led a team of officers, at about 09:35hrs in the morning yesterday, which include; the Head of Intelligence, Head of Anti – Vandal Unit, Armed Squad personnel, Public Relations Officer, OC Exhibit and some intelligence officers to the crime scene to ensure on the spot assessment of the dastard act and unscrupulous activities of the vandals.

The truck was arrested in the midnight but no suspects were apprehended while the NSCDC operatives remain stationed from dusk to dawn without any fear of attack until the operation was apparently successful. The truck has been brought to the State Command Headquarters immediately has ordered by the Commandant.

Commandant Ayeni has also ordered that further investigation should also be instituted, over the illicit act perpetrated by these vandals in order to get to the root of the matter and ensure justice is served.

It is pertinent to state here that the NNPC authorities in Lagos has also been informed directly by the Commandant about the dastard act of the vandals in the area and were also advised to commence repair works where necessary in the pipeline area.

Finally, the Commandant posited that the escaped vandals will not be spared as the command will ensure they are successfully arrested and brought to book in accordance with the provisions of the law, while appealing to citizens and residents of the state to continue to avail the corps with relevant security information which will assist the corps in ensuring maximum security and safety of lives and property and the successful protection of oil pipelines and critical national assets and infrastructure amongst others in Lagos State.