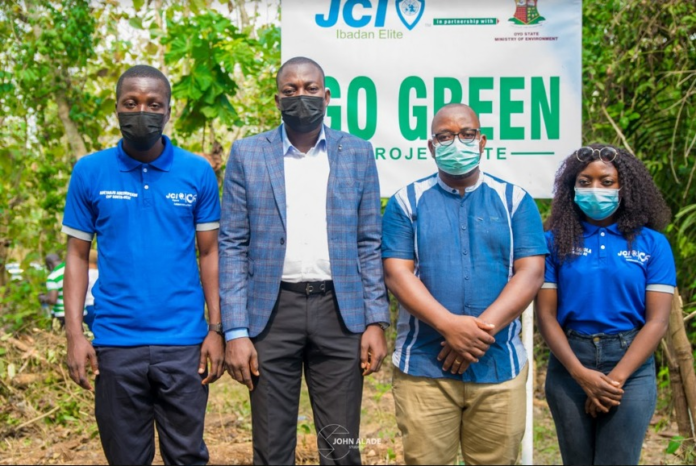 In a bid to combat the incessant issue of global warming which has resulted to the recent climate change, Junior Chamber International, Ibadan Elite chapter, flagged off her afforestation project tagged Go-Green, at the Gambari Forest Reserve, Oyo state.

The event which took place in the early hours of Monday, 18th January 2020, was convened by the organisation’s 2021 President, JC Toba Adeyeye, his Board of Directors and their entire membership.

The President of JCI Ibadan Elite, JC Toba Adeyeye, in his remarks, mentioned that the afforestation project is one of the planned projects aimed at community development, environmental management and sustainability in line with UN/SDG goals.

He further stated that JCI Ibadan Elite intends to plant 11,000 trees on the allocated farmland, as part of the 100,000 trees planned to be planted by JCI in Nigeria. He expressed his appreciation to the Ministry of Environment, Oyo State for the support and allocation of 10 hectares of land for the purpose of the GO GREEN project.

He mentioned that the afforestation exercise does not end by just planting the trees, but the planted trees would be nurtured and well monitored.

In his words “the world would be a better place if we all collaborate to make a meaningful contribution to humanity through selfless efforts”.

Speaking further, he reiterated that global warming is not a new subject of conversation all over the world and one of the ways we can mitigate its effect, is by planting trees around our houses, offices, religious houses buildings, recreational centres etc.

The National President of the youth based organisation, JCIN Ambassador Abiola Olorunisola, during his speech appreciated the Governor of Oyo state, Engr. Seyi Makinde, for the opportunity to partner with the government on this project.

While speaking, the Deputy Director stated that Oyo State Government through the Ministry of Environment and Natural Resources, applauded the GO-GREEN initiative taken up by JCI Ibadan Elite in Oyo state. He commended the leadership of the organisation for their drive and selfless services towards improving the lives of the people of Ibadan and Oyo State at large.

While speaking, he touched on the need for individuals to take responsibility for the earth’s sustainability and one of the ways this can be achieved is through tree planting which in turn improves the vegetative cover and also aids the healing of our planet from consequences of global warming.

He admonished JCI Nigeria to carry out the same project in other states in the country and the National President confirmed that plans were already on in other local chapters of the organization with regards to the GO GREEN project.

Also present at the event was the Charter President of JCI Ibadan Elite, JCI Senator Tolu Adeniyi, her successor, JCIN Ambassador Sanmi Abiodun who is equally the present National Editor of JCI Nigeria.

The immediate past president of JCI Ibadan Elite, JCIN Ambassador Oluwakemi Irinoye, thanked the participants for showing commitment to the afforestation project with their supports especially by gracing the occasion of the flagship exercise.