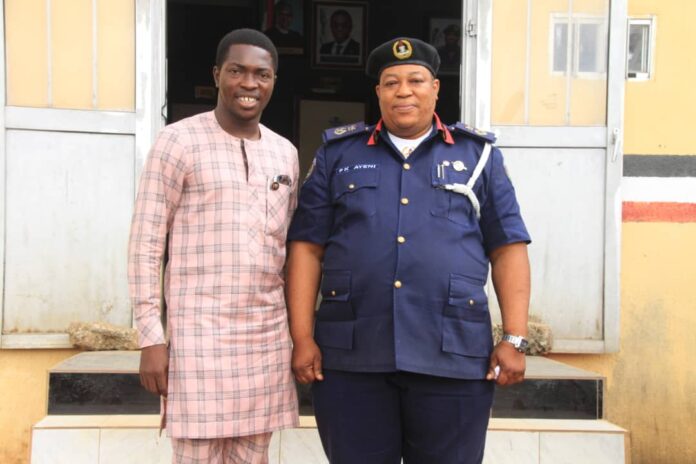 Godfathers Are the Problem of Vandalism, and We Will Flush Them Out – Ayeni PK, NSCDC Commandant

The Commandant, Nigeria Security and Civil Defence Corps (NSCDC), Paul Kolawole Ayeni has said that godfathers are the major problem of vandalism in the country, adding that the Corps will not relent in its fight against vandalism, vandals and their godfathers.

P.K Ayeni stated this during a courtesy visit by the executive committee of the National Association of Online Security News Publishers (NAOSNP) led by its President, Mr. Samson Oki.

The Commandant expressed happiness with the visit, praising the Association’s and media bodies’ unbiased reportage of security and other related news.

While pledging the Corps’ unrelenting support and cooperation with the media, he vowed not to relent in his efforts to reduce vandalism to the barest minimum, stating categorically that he hates, with a passion, vandals and vandalism.

“This people make governance very difficult, and deprive the people of accessing democracy dividends by the way they siphon petroleum products and infrastructural facilities installed by the government for the benefit of the people,” he said.

He frowned at any security agent colluding with vandals, saying the harm the vandals do is far more greater than whatever you will collect from them.

Take for instance, they bribe you with one million naira, they will syphon fuel of 800 million worth of oil. Who is the loser? So here, all we do is flush them out, and we will never cooperate with criminals,” he blurted.

Ayeni added that beyond the vandals that commit the atrocities, there are notable individuals in the society who are their godfathers and support their nefarious activities.

“I say it again, I hate vandals and I tell anyone that cares to listen never to engage in vandalism, because the NSCDC I head in Lagos will not spare them. However, we are facing the greater challenge of godfathers behind these vandals protecting them. These people are notable in the society, but we are leaving no stone unturned to fish them out, and prosecute them,” the Commandant promised.

Earlier, the President of NAOSNP, Mr. Oki, had expressed satisfaction at the efforts the Lagos Command under PK Ayeni has put in so far to address the issue of vandalism and siphoning of the nation’s natural resources for selfish and criminal use.

Recounting that the Commandant was posted to Lagos at the peak of the ENDSARS crisis, Oki acknowledged that the Commandant handled the affairs professional with little or no casualties. He noted as well that NSCDC has come of age, and recorded landmark achievements in the right months Ayeni has held sway as the helmsman in Lagos.

“I must say that you have proved yourself a worthy administrator, and have carved yourself a worthy image since you came on board. NAOSNP congratulates you on the lofty heights you have created, and will continue to partner with you and the Corps in the reportage of well researched and investigated stories and news,” Oki said.

He further lamented the place of fake news as the original harbinger of most of the crises the country has experienced in recent times, especially the spill over of the EndSARS crisis of October, 2020.

Also speaking, the Public Relations Officer of the Association, Mr. Eric Elezuo, praised the magnanimous efforts of the Lagos Command, adding that they have performed beyond expectation, adding that notwithstanding, a lot still need to be done to further perfect and cement what has been achieved, especially in the area of publicity.

“The reward for hard work is more work. So continue to do what you are doing, and do not relent in flushing out enemies of the society, who call themselves vandals, and their co-travelers in the name of godfathers. We, the media in general, and NAOSNP in particular are solidly behind you,” Elezuo said.

In his remarks, the Chief Administration Officer of the Corps, Deputy Commandant Paul Shomide, appreciated the Association for the visit, saying the Corps cherishes partnership with the media, and will continue to keep the relationship with NAOSNP alive for more achievements.

Shomide recalled that the period when the Police down tools as a result of victimisation occasion by the EndSARS protests, it was the NSCDC under Ayeni that held the society together.

Commandant Ayeni also reiterated the Corps’ commitment to work effectively with the media so that the corporate goal and objective of NSCDC will be met saying “the better the organisation is known, the greater it is appreciated. We cannot do without the media”.

The NSCDC is a paramilitary organisation, established by the Nigeria Government to help in putting a stop on vandalism of national facilities and stealing of petroleum products along pipeline routes among others.