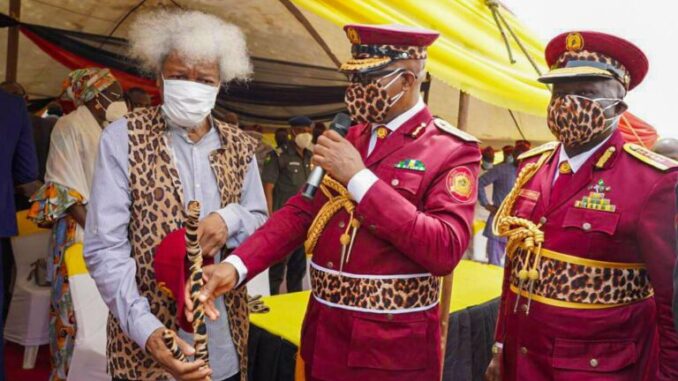 Ogun State Governor, Dapo Abiodun, on Thursday decorated the Nobel Laureate, Prof Wole Soyinka, as the Super Marshal of the Amotekun Corps in the state.

Abiodun presented the insignia of the corps to the literary icon shortly after he officially inaugurated the state’s wing of the South-West Joint Security Outfit known as Amotekun.

The governor said the outfit was not meant to compete with other security agencies, but to further strengthen the security apparatus of the State.

Speaking at the inauguration of the Amotekun at the Arcade Ground, Oke-Mosan, Abeokuta, Abiodun said: “Let me note that the inauguration of the Amotekun in Ogun State is not to create unnecessary competition with other security agencies in the State. And this is why everybody must work together to further strength security of lives and property in the State.”

Soyinka lamented the invasion of his Abeokuta home in the past and subsequent carting away of some “sensitive materials” by yet-to-be identified burglars.

Soyinka said that he reported such incidents to the Police and equally learnt that the matters were brought to the attention of the disbanded “Special Anti – Robbery Squad (SARS) and NSA” but rued further that no one had given him any feed back about outcome of the cases till date.

He recalled that his home was burgled several times by unknown persons without the security agencies being able to stem the tide until he took personal steps to secure his life and space.